A Call for Peace in Afghanistan 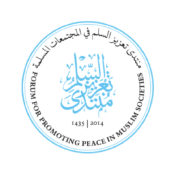 In the Name of God, Most Compassionate, Most Merciful.

Praise be to God, Lord of the universe, and may God’s peace and blessings be upon our Prophet Muhammad, his family, and companions.

Statement of the Forum for Promoting Peace on Afghanistan

A call for peace and working together for harmony August 21, 2021

Since its inception, the Forum for Promoting Peace in Muslims Societies has made working for peace, both in principle and in practice, its foremost objective. Hundreds of scholars, intellectuals, and opinion-makers from all over the world have participated in the conferences and programs that have been held by the Forum over the years. We base these efforts on sound theological principles and effective means of communication. Our efforts arise out of a firm conviction of the critical importance of peace as an objective that preserves the five universal aims of the Shariah: preservation of faith, life, intellect, family, and property. Such a conviction stems from various Qur’anic teachings, such as the verse, “O you believe, enter into peace wholeheartedly” (2:208), as well as authentic hadiths that enjoin people to spread peace and to greet others with peace, particularly the hadith that states, “Three characteristics exist in which the one who embodies them possesses all of faith: holding yourself accountable, bringing peace to the world, and charity even when in need.”

Over the years, the Forum for Promoting Peace has worked in various arenas, starting with the Islamic community, in which leaders from every Muslim country as well as Muslims from various other regions all over the world participated. Then, with the New Alliance of Virtue, the Forum began to work together with other faith-based communities and humanitarians. None of these programs and initiatives conflict with Islamic teachings, nor do they contradict the realities of the time in which we live—for today, we are all neighbors to one another on this planet.

These efforts—the projects, conferences, research, and studies carried out by scholars and specialists from all over the world—have provided, praise be to God, a noteworthy knowledge base for others to draw upon. We invite our brothers in Afghanistan as well as others around the world to make use of it. Therefore, out of fraternity, love, and compassion for our fellow Muslims, we at the Forum for Promoting Peace in Muslim Societies based in the United Arab Emirates turn to our brothers in Afghanistan, who have endured forty years of brutal conflict and instability, at this critical stage in the history of this country, to emphasize the following:

The Prophet Muhammad said, “A good word is charity.” That is our call and our prayer, and we ask God to make our last prayer, “Praise be to God, Lord of the worlds, and peace, mercy and blessings of God be upon you.”