The 8th Advisory Group Meeting of the Peacemakers Network was a prime example of the resilience and steep growth curve of the Network. The meeting brought together actors working in the intersection of religion, peace and mediation in, for example, Pakistan, Libya, Nigeria and the various UN agencies in New York and Geneva. The warm May weekend and cozy meeting spaces in Barkarby Sweden proved to be an ideal setting for discussions ranging from strategy development to reflections on the challenges and opportunities shared in all levels of peacebuilding and peacemaking.

“Since initiation, the Networks vision has been to serve the grassroots level – those working amidst conflict and building peace in the most challenging contexts,” Dr. Elsanousi said after the last session of the two-day meeting.

“This is a priority that we will keep clear in our work as we strengthen collaboration with various high-level institutions, such as the United Nations. Our goal is to strengthen the connection between different tracks in order to make way for sustainable peace initiatives. Even though established institutions have the strength and power to push for change, it is the local actors who have the access, legitimacy and knowledge of what works.”

The themes discussed during the Advisory Group Meeting were guided by the strengths and weaknesses raised in the recent evaluation conducted by an independent consultant commissioned by the Ministry for Foreign Affairs of Finland. These themes included supporting the institutionalization of the Peacemakers Network, strengthening collaboration among and between Network members, and mainstreaming inclusivity throughout the work of the Network.

“The high number of participants representing key organizations is a clear indication that the Network is able to add value to the work of these actors. Now our priority is to clarify our strategy and make engagement and collaboration even easier and the impact of our work more visible,” Dr. Elsanousi noted.

Similar reflections were shared by the meeting participants. Participants echoed that the Network is a trusted entity that has the ability to serve in a multitude of ways, be it through concrete peace initiatives, access, technical support, policy advice, research or advocacy. 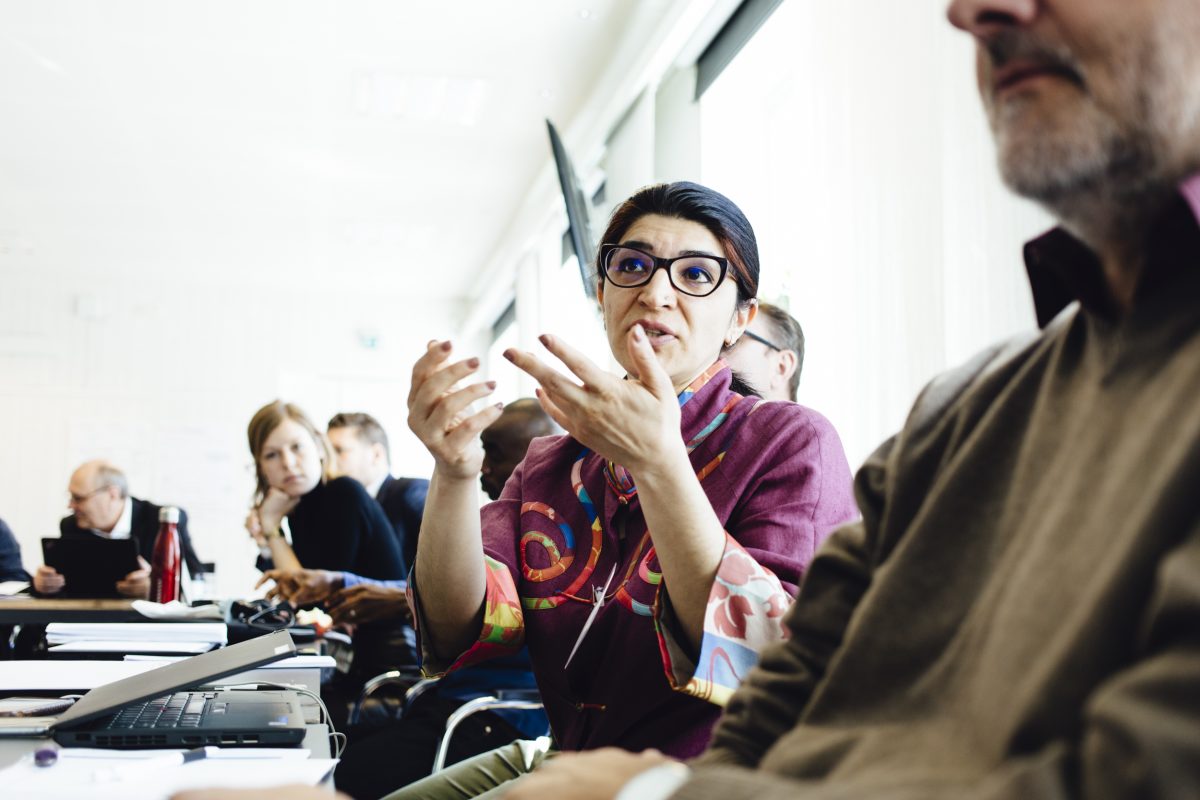 Nika Saeedi from United Nations Development Fund shares her insights on the strategy development of the Network for Religious and Traditional Peacemakers.

The strengths of the Network were also noted through the challenges seen in the field. Several participants noted the shrinking space of civil society and the decreased funding of vital institutions and operations. These challenges have been coupled with the changes seen in the nature of conflicts – the decrease of inter-state disputes and the increase intra-state clashes characterized by identity-based fault lines. These trends provide a clear need for strengthened engagement and support for insider mediators.

“The Network has been a significant partner in our work in assisting mediators to prevent and resolve conflicts. Religious and traditional leaders have an essential role to play in this regard. The Network is vital in helping mediators to identify, interpret, and translate the context, dynamics, entry-points, and power-holders in a conflict,” Enrico Formica, Senior Political Officer from the Mediation Support Unit of the Department of Political Affairs, highlighted during an open discussion on the opportunities presented by a network-like way of working.

“All of our organizations are working to ensure the greatest possible inclusivity of peace process and ensure that that the different voices are heard at the negotiation table. Inclusivity is not only desirable but necessary to address the complexity and fragmentation of many modern conflicts. Yet, inclusivity is not just about securing a seat at the negotiation table for, for example, a religious or traditional actor. Hearing and understanding the role, impact and challenges faced by these actors and making them count in the discussions are significant achievements. Here the Network can and does have a central role,” Mr. Formica concluded.

As spring turns to summer, the Network Secretariat prepares for an upcoming strategy workshop and the further strengthening of collaboration with all levels of peacebuilding.

“The Peacemakers Network was created for religious and traditional actors,” Dr. Elsanousi reminded.

“We are a service organization. Now it is our task to strengthen effective and systematic ways of serving these peacemakers to find sustainable ways to peace.”