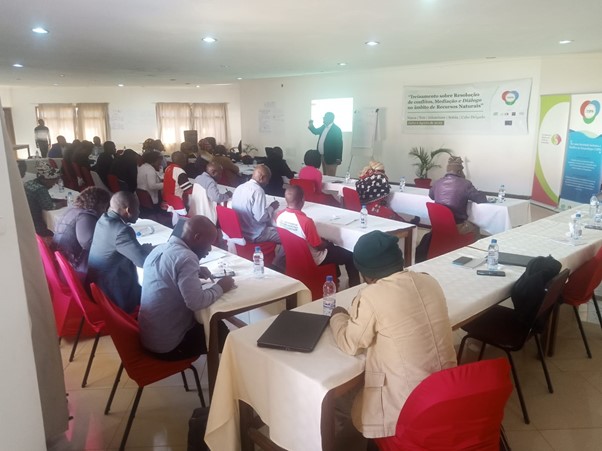 As part of the European Union-funded project, ‘Towards an Inclusive and Peaceful Society in Mozambique,’ a sequence of trainings for CSO and community leaders on conflict analysis and resolution, mediation and dialogue for natural resource management was hosted in Northern Mozambique.

These trainings look into the context of Mozambique where the provinces of Tete, Niassa, Sofala, Inhambane and Cabo Delgado are highly prone to exploitation of natural resources and host major projects in the mining, oil and gas sector in Mozambique and this are fueling the conflicts challenging the peace and stability in country.

For example, since 2012, the population affected by mining in the district of Moatize, Tete has been denouncing acts of violation and theft of their land by mining companies. In Niassa and Sofala, the forestry sector has been a traditional cause of conflict between private companies and communities. Foreign government funded development organizations have also been accused of land grabbing. In Inhambane, companies such as Rio Tinto and Sasol are exploring the reserves of heavy sands and gas and conflict have been known to employ youth.

Due to the large projects of the Natural Resources and Extractive Industry in these provinces, there are substantial challenges, mainly regarding human rights, land disputes, resentment process, which creates conflicts and reiterates the need for capacity building for mediation, management, prevention and resolution of conflicts in the context of the Natural Resources.

Based on the current context, the objectives of the trainings aim to ensure CSO’s and community leaders as beneficiaries of the project are able to (i) engage in resolution, community conflict mediation and peacebuilding initiatives at provincial and national levels, (ii) defend the chain of sustainable and responsible exploitation of natural resources in general according to internationally acceptable standards, (iii) engage in activism and master the tools of lobbying and advocacy in the field of Natural Resources and (iv) exchange of experience and sharing of good practices in the peaceful management of Natural Resources and lobbying & advocacy.

To achieve these objectives, trainings reviewed natural resource management, inclusive and sustainable land management, conflict analysis, conflict resolution, mediation and dialogue. It also explored the theory and practice of conflict analysis and transformation and on competencies in the design of mediation and dialogue processes.  Participants gained an understanding on the conceptual understanding of sensitivity to conflict, principles of not harming and creating a safe space for dialogue.

“I leave the training with a much clearer mind, I learned new things and I am willing to support my community in the mediation of conflicts that have been bothering us. I would like us to involve more Youth in Nipepe so that there are many of us to intervene in the context of conflicts over Natural resources, as we already have the tools for analysis and advocacy.” – TIPs project trainee, ChiqUita Baptista from Nipepe, Niassa

Within the three provinces the government authorities participated during the open Remarks congratulating the FCA/NRTP and IMD by this initiative given that all of the three Provinces are fencing several conflicts related to Natural Resources Exploitation, Land Grabbing, so providing the participants with tools related to conflict prevention, mediation and resolution is welcoming and adding value to the province.

The trainings occurred in Niassa, Tete and Inhambane Provinces with 96 participants from the local community, including women and youth. 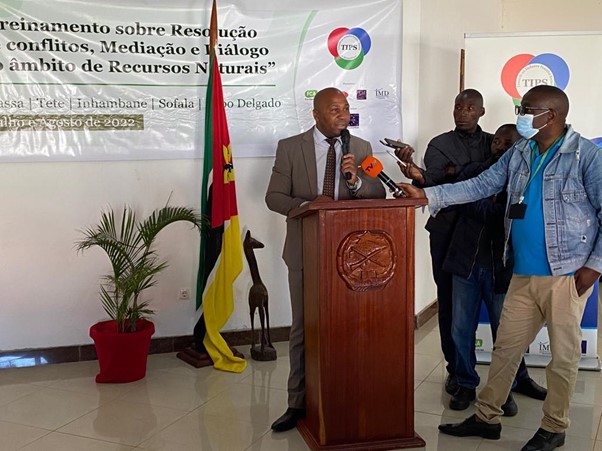 About the TIPS Project

Towards an Inclusive and Peaceful Society in Mozambique’ (TIPS) is a European Union-funded project that aims to contribute to conflict prevention, crisis preparedness and response, and peacebuilding through inclusive natural resource governance and management through strengthening the leadership and capacities of civil society actors as well as preventing and addressing natural resource-based conflicts through multi-stakeholder dialogue and engagement in Mozambique.

The outcomes of the project are 1) Increased collaboration and mutual learning between communities, CSOs, national and provincial authorities, and the private sector on conflict resolution and natural resource management (NRM), and 2) Enhanced and institutionalized participation of target CSOs in natural resource governance and development processes.

TIPS is supported by a consortium of partners comprised of the Network for Religious and Traditional Peacemakers (NRTP)/Finn Church Aid (FCA), Instituto para a Democracia Multipartidária (IMD), Instituto de Estudos Sociais e Económicos (IESE) and in collaboration with project associates, The Council of Religions in Mozambique (COREM) and Faith Associates.