Implementing the Marrakesh declaration – road toward the peaceful coexistence of religions

The Marrakesh Declaration is a milestone for the rights of individuals to freely practice their religion in countries with a Muslim majority. The declaration was issued in January 2016.

The declaration demonstrates Islam’s commitment to peaceful coexistence with other religions and the protection of minorities from all types of religious persecution, displacement and discrimination in predominantly Muslim countries. It also calls for the leaders of other religions to confront these same acts against Muslim minorities in their countries. 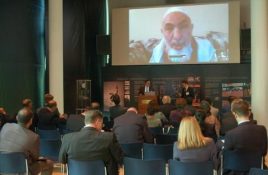 The Author of the Marrakesh declaration, Shaykh Bin Bayyah, joined the conversation via Skype

The declaration was led by Shaykh Bin Bayyah, President of Promoting Peace in Muslim Societies. Over 300 Islamic leaders, ministers, muftis and religious schol
ars from more than 100 countries gathered in Marrakesh to discuss the Islamic faith and its traditions, as well as domestic and international rights.

The European Union has issued guidelines on the promotion and protection of freedom of religion or belief, asserting this freedom as a fundamental right of every human being. Finland is committed to following the guidelines and working toward their goals.

The roundtable discussion held on 20 April was the first step in the dialogue on how to implement the Marrakesh declaration. All speakers agreed that the topic is very timely, and it is important to make people aware of the declaration and to maintain its momentum.

Guest speaker David N. Saperstein, U.S. Ambassador-at-Large for International Religious Freedom, highlighted that the global community has to ensure that the Marrakesh declaration becomes reality. According to Ambassador Saperstein, the West, interfaith communities, diplomats and the media should focus on dialogue and empowering the Muslim voices that created the declaration. This is crucially important if we want to counter violent extremism, Ambassador Saperstein said. He concluded his speech by saying that all of us have a responsibility to speak up against intolerance and ignorance, and we have the power to make the world as we want it to be.

Shaykh Hamza Yusuf, who described himself as a student of Shaykh Bin Bayyah, pointed out that the Muslim world is not a monolith, and that it was once one of the first multicultural, multiethnic and multireligious areas in the world. According to Shaykh Yusuf, the Muslim world is going through very hard times, but the societies have a great power for rebirth.

Dr. Mohamed Elsanousi, Director of the Secretariat of the Network for Religious and Traditional Peacemakers in DC

Dr Mohamed Elsanousi, Director of the Secretariat of the Network for Religious and Traditional Peacemakers in DC, laid out ideas on how the Marrakesh Decla
ration could be implemented. He said it is important to identify potential partners and engage with them, communicate about the significance of the declaration, arrange more policy education and have Muslim scholars discuss the declaration.

Finn Church Aid is one of the founders of the Network for Religious and Traditional Peacemakers and functions as its secretariat.

The text is modified from the original text published on the homepage of the Embassy of Finland in Washington DC.