A Joint Response to a Divided World

“We are seeing a divided world. We are seeing that misunderstandings between communities are on the rise and these misunderstandings are used to perpetuate violence,” director of the Washington DC Office of the Peacemakers Network Dr. Mohamed Elsanousi said when describing the backdrop and context of the Alliance of Virtue conference held in Washington DC from the 5th to the 7th of February.

“Just as we see religious scriptures used to legitimize violence, these same scriptures can be used to find a common, peaceful response to hatred,” Dr. Elsanousi elaborated adding, that in a situation of rising tensions, such peaceful initiatives rarely grow on their own. They call for alliances.

“What we are seeing today calls for religious leaders to speak out. To speak out for a strong, common relationship built on dialogue, respect and trust. Only this way, are we able to fill the gaps of these deepening divisions we are seeing,” Dr. Elsanousi said.

To meet this need, The Forum for Promoting Peace in Muslim Societies lead by Shaykh Abdallah bin Bayyah together with partners, including the Peacemakers Network, called religious leaders representing Abrahamic faiths and faiths including Sikhism, Jainism and Hinduism to Washington DC for a conference aimed at reviving an alliance of faiths for peace. The three-day Alliance of Virtue conference climaxed in the launch and signing of the Washington Declaration. 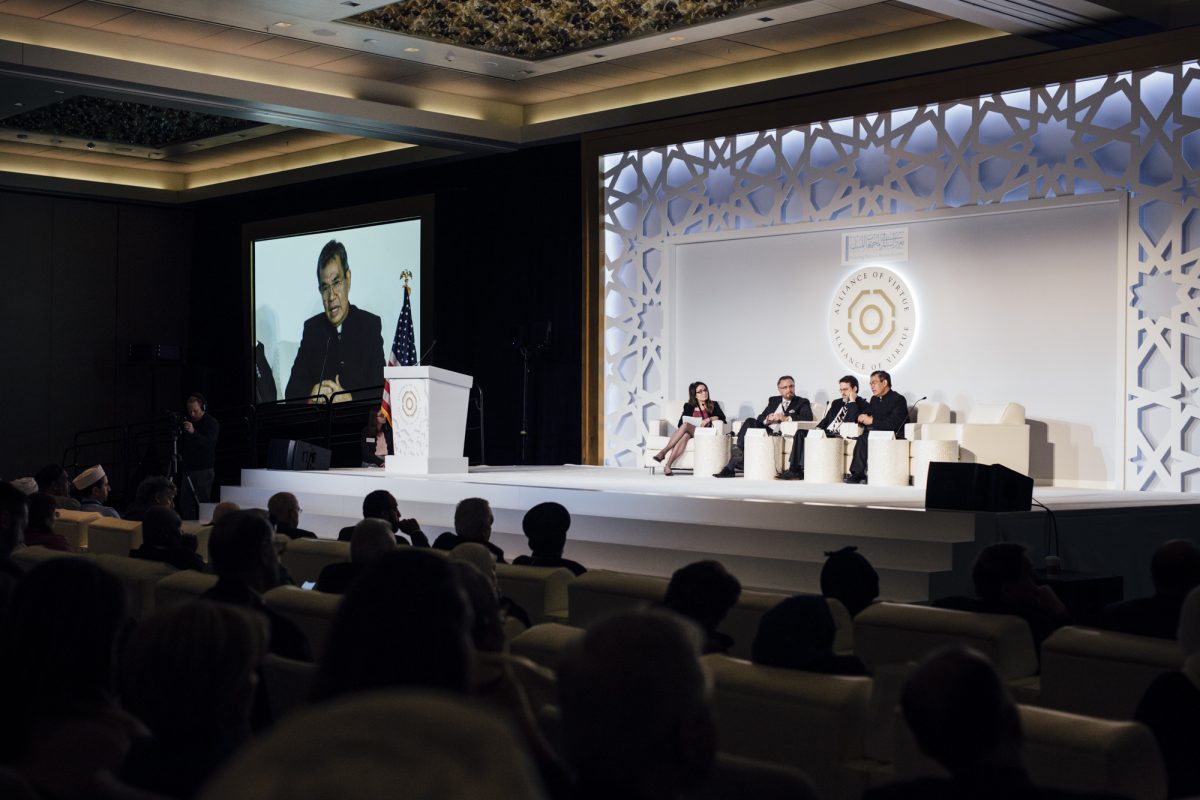 The Alliance of Virtue conference brought hundreds of religious leaders and actors to Washington DC.

More than a Declaration

In spite of the joint initiative launched in Morocco, the theme of the Marrakesh Declaration remains as timely as ever. A recent reminder of the current dynamics was the announcement of the U.S. State Department to place Pakistan on a special watch list for “severe violations of religious freedom”. To add to this, the press release published in January stated that the State Department had re-designated ten other nations as “countries of particular concern” under the International Religious Freedom Act. These countries were China, Eritrea, Iran, Myanmar, North Korea, Sudan, Saudi Arabia, Tajikistan, Turkmenistan and Uzbekistan.

According to Dr. Elsanousi, it is exactly these developments that called for a further expansion of the Marrakesh Declaration. The unprecedentedly high number of conference participants was a further indication that the theme addressed in Marrakesh remains as pressing as ever. 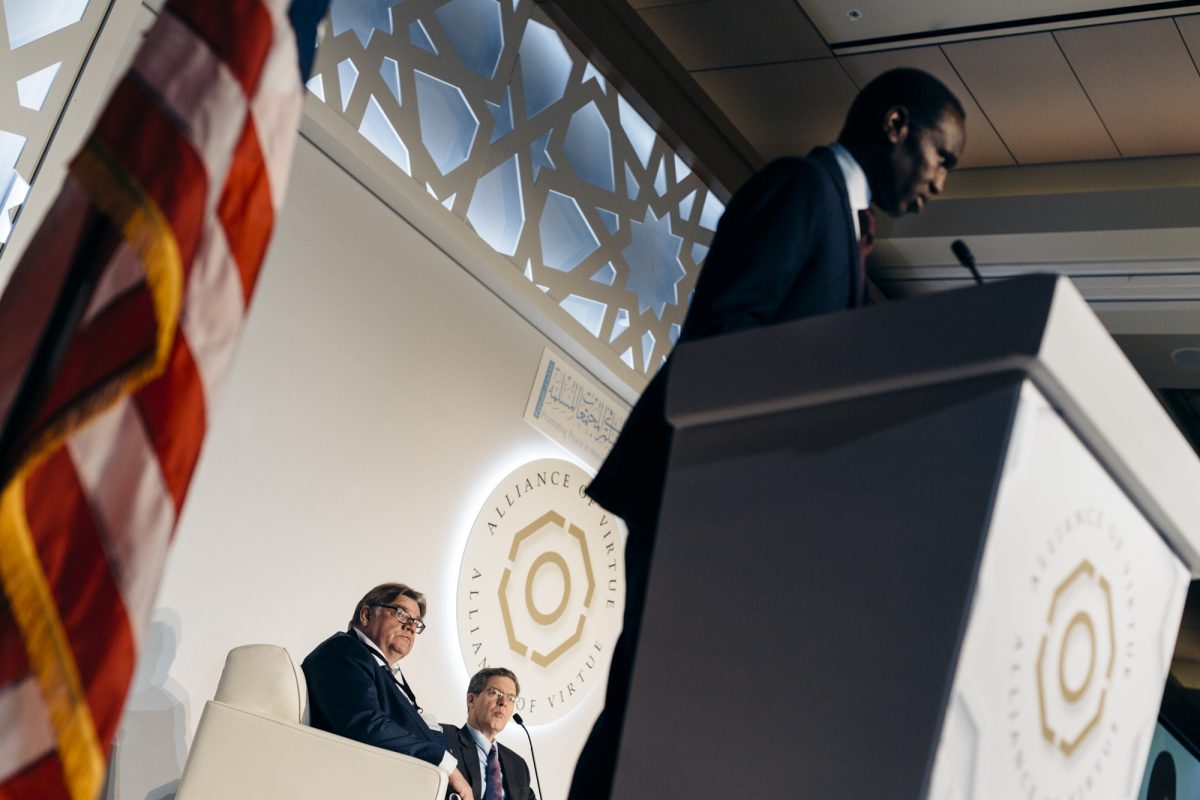 Minister Timo Soini and Ambassador Sam Brownback addressed the audience and emphasized the need to keep freedom of religion as a foreign policy priority. Dr. Mohamed Elsanousi as the master of ceremonies of the conference.

From Places of Worship to Political Decision-making

The question of religious freedom and the role of religious actors and leaders in addressing violence has also gained momentum among political decision-makers around the globe. Among the speakers of the conference were the freshly appointed U.S. Ambassador-at-Large for International Religious Freedom Sam Brownback and the Minister for Foreign Affairs of Finland Timo Soini. Both affirmed that religious freedom is a foreign policy priority. Minister Soini went even further and called for the formation of an international multi-religious body consisting of religious actors tasked to support in conflict prevention, mediation and reconciliation.

“Research show that countries that do not have religious freedom are lagging behind when it comes to economic resilience and development,” Dr. Elsanousi said highlighting the urgency of the statement by both political leaders. Development and economic growth in turn are directly tied to domestic and international security.

As Minister Soini laid out in his speech, conflicts with religious dimensions cannot be resolved without taking religion into account.

From Declaration to Next Steps

As conference participants return to their respective contexts, the strength of the alliance will be measured in the months and years to come. Even though the mere establishment of an Alliance of Virtue is in itself an unprecedented achievement, Dr. Elsanousi recognized that next steps call for the institutionalization of the Alliance.

“One of the key recommendations of this conference presented by Minister Soini and later repeated by Shaykh bin Bayyah, was the establishment of an inter-religious council to address issues of religion in conflict. This is a recommendation that needs to be brought to action,” Dr. Elsanousi highlighted.

“Yet religious communities alone cannot do this. My hope is, that the Alliance of Virtue will deepen to form alliances and collaborations with governments. Such collaborations and joint mechanisms will ensure that these shared virtues reach high-level decision-making and grassroots action.”

The statements of the speakers, the excitement of the participants and the words of the declaration speak in favor of this goal. 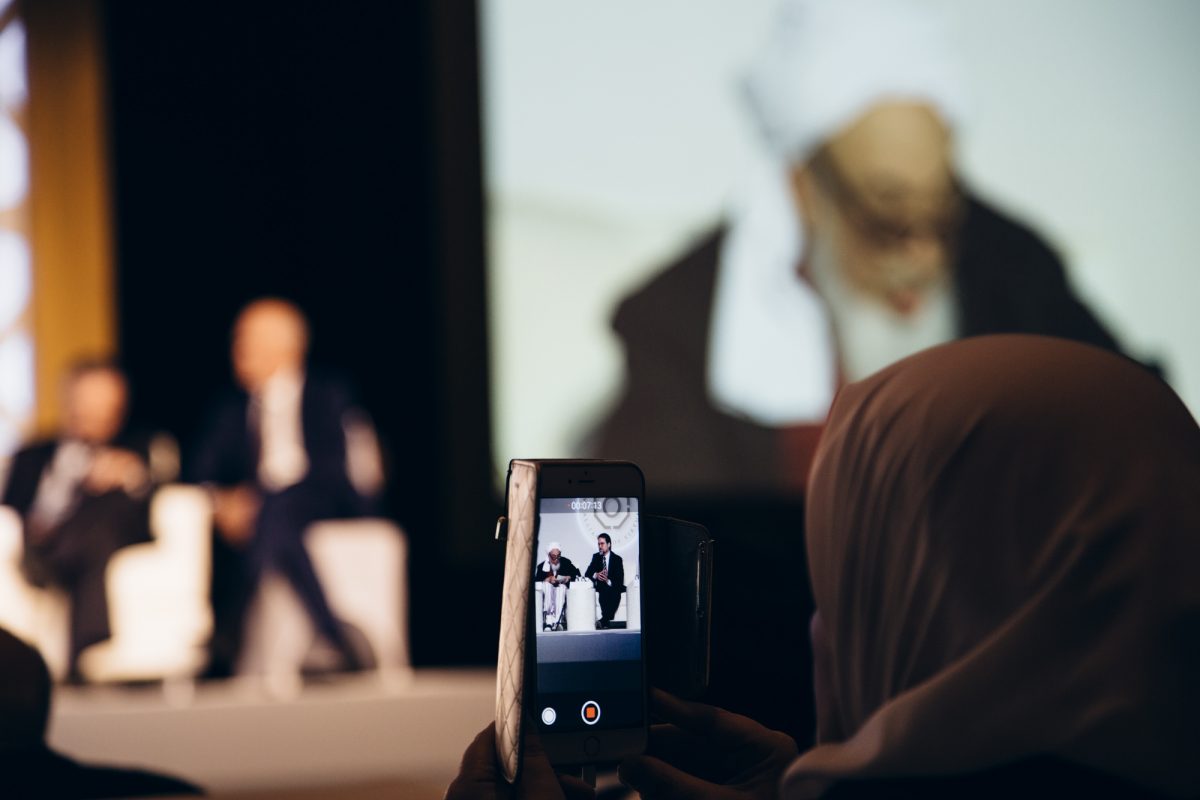 For more information: Hundreds of Religious Leaders to Affirm Rights of Religious Minorities and Respect for Muslims in United States