Learning Models for Refugee Resettlement, Inter-Faith Dialogue and PVE in the USA

WASHINGTON DC/CHICAGO/HELSINKI – The Secretariat of the Peacemakers Network joined the Finnish Minister of Employment Jari Lindström on a tour in Washington DC and Chicago from the 15th to the 19th of May. The goal of the visit of the ministerial delegation was to explore models and best practices on refugee resettlement, integration and employment. A special emphasis was laid on the role faith-based organisations and religious communities have in the work done to cater to the needs of newly arrived refugees in the United States.

An additional theme scrutinized during the week was the work done by faith and local communities to foster inter-faith dialogue and prevent violent extremism(PVE).

The visit was the first visit of the Minister of Employment of Finland to the United States since the founding of the ministry in 2008. For the Network Secretariat the visit marked a second study tour in the United States. In 2015 the Network Secretariat visited the twin cities of Minneapolis and St. Pauls in order to learn about best practices for PVE. The first delegation was accompanied by civil society, NGO and government representatives, and succeeded in strengthening the PVE work done in Finland.

Heading picture: Finnish Minsiter of Employment Jari Lindström at the roundtable discussion at Shoulder to Shoulder Campaign in Washington DC.

The themes of the week were greatly reflective of the so-called refugee crisis of 2015, which brought more than 1,2 million asylum seekers to Europe. In spite of Finland’s geographical distance from the nucleus of the conflicts people sought refuge from, Finland received a historical number of asylums applications. By the end of 2015 more than 30 000 asylum seekers had registered in Finland.

The ministerial visit began in Washington DC, where Minister Lindström and the ministerial delegation met with State officials, faith-based and community organizations and research institutions. The second morning in Washington DC was opened with a roundtable discussion at Shoulder to Shoulder Campaign. The roundtable brought religious leaders, representatives of religious communities as well as organizations working in refugee resettlement together to share their lessons learned and best practices to the Finnish delegation.

A figure that struck the delegation was the fact that 80 percent of the refugees resettled in the United States are employed within the first six months of their stay in the country. Representatives of refugee resettlement agencies were quick to note that employment was not synonymous for self-sufficiency. Most of the first jobs refugees attain are low-income posts, and most of the refugees remain dependent on the support ofrefugee agencies even after entering the job markets.

Another aspect presenting a stark contrast to Finland, was the role faith based agencies and organisations have in the work done to holistically support refugees. Six out of nine of the umbrella organisations responsible for refugee resettlement in the US are faith based.

Roundtable discussion at Shoulder to Shoulder Campaign in Washington DC. The roundtable brought civil society actors, NGO representatives and religious leaders together to share best practices and experiences on refugee resettlement and PVE.

PVE Begins from the Grassroots

One of the highlights of the visit in Washington was the meeting with Dr. Tanveer A Mirza and Imam Mohamed Magid held at the Virginia Mosque and the All Dulles Area Muslim Society (ADAMS) Center. The meeting started with a discussion on the work done by the Virginia-based and community run non-profit organisation, Foundation for Appropriate and Immediate Temporary Help, which provides services and support for refugees. After Dr. Mirza’s presentation, the discussion proceeded to explore the pivotal role faith communities have in preventing radical and violent interpretations of faith. 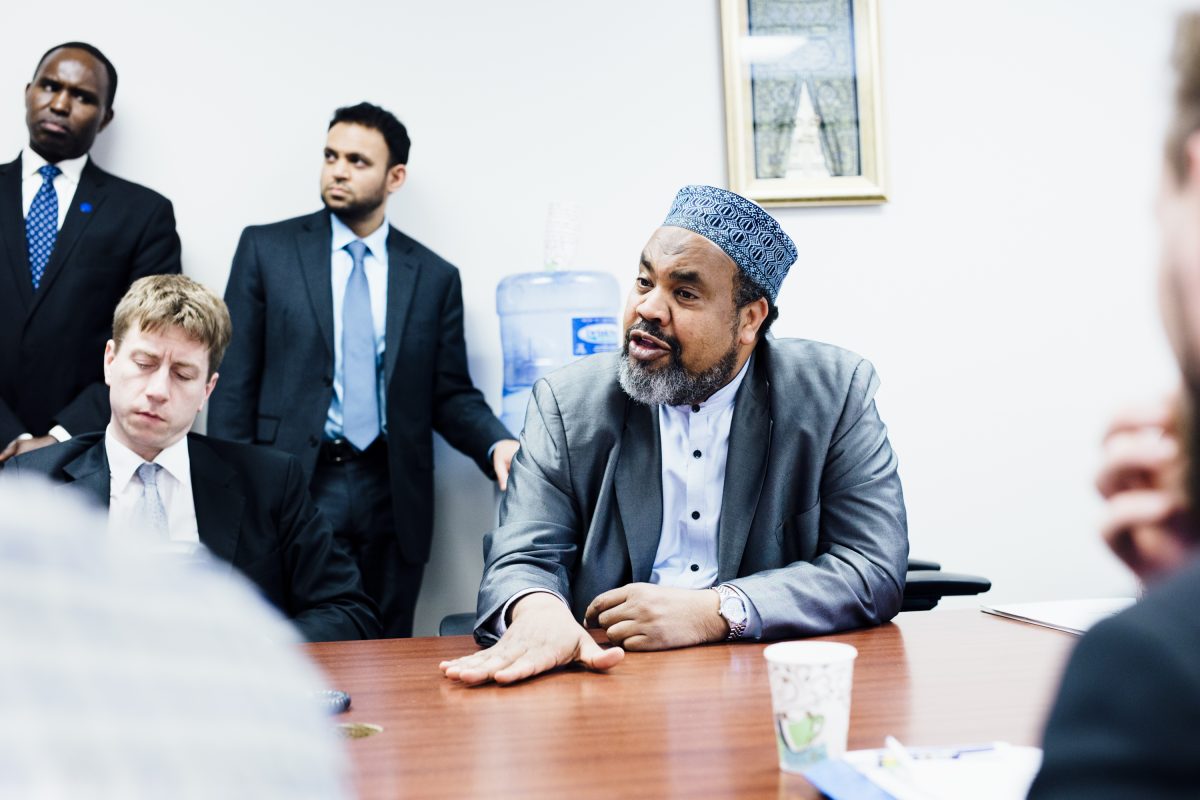 Imam Mohamed Magid shares the history of the Virginia Mosque and work of the ADAMS Center. The mosque and center are not only designed for religious practice, but for activism, learning and sports. “Before there was a mosque, there was  a basketball court,” Imam Magid said. “There needs to be a open space for activism and discussion in society. When religion moves from the mosque to the living-room, that is when it becomes dangerous.”

“The answer is not less religion. The answer is better education of religion,” Imam Magid emphasized and urged the Finnish delegation to address the emotional and psychological factors leading to the pull-factors of radical groups.

“The key is in the sense of belonging. The United States is often called a melting pot, but we prefer to call it a salad bowl. People cannot be forced to assimilate, but they can be welcomed to integrate.”

Also present at the meeting was a family, whose son was radicalized and persecuted for conspiring to provide material support to a foreign terrorist organization in 2016. The mother of the young man shared her experience on how the events leading to the sentence not only touched the young man and his family, but the community as a whole.

“In 70-80 percent of the cases, the community and family are aware of what is going on,” Imam Magid noted and underlined the role the community, and especially the mothers, have in recognizing and countering violent extremism.

The mother, who requested to remain anonymous, echoed Imam Magids words. She had followed her son’s behavioural change with close proximity and had reached out to her religious community, including Imam Magid, for support.

In spite of attempts to intervene, the family was faced with the lack of  long term, specifically designed programs to serve the needs of their son. Without a better alternative to protect her son from joining the ranks of the terrorist organization, the mother herself was the one to turn the young man to the FBI.

“When my son was prosecuted, I told him that we would go through this together. My son is a victim – and he is not the only one. There are several others like him out there”, the mother said.

The son was sentenced to 11 years in prison, followed by a lifetime of supervised release. Even though harsh sentences can act as a deterrent to radicalizations, both Imam Magid as well as the mother of the youth underlined that such sentences create a hindrance for the work done to prevent violent extremism at the community and grassroots level. The fear of prosecution has caused ever more families to remain silent when faced with hints of radical thought.

The lack of deradicalization programs is not unique to Virginia, but is a a lack faced both in Finland and the US. The need for asupport program is visible from all the way from prevention, to possible sentencing to the time after the time in prison.

“I do not want my son to come out from prison as an angry man. I want him to walk free as a new man. This is not only about my son. There are other youth like him out there”, the mother stated.

“If he becomes the voice that challenges the message of terror groups and their recruiters, his voice will always be stronger and more credible than mine”, Imam Magid said. 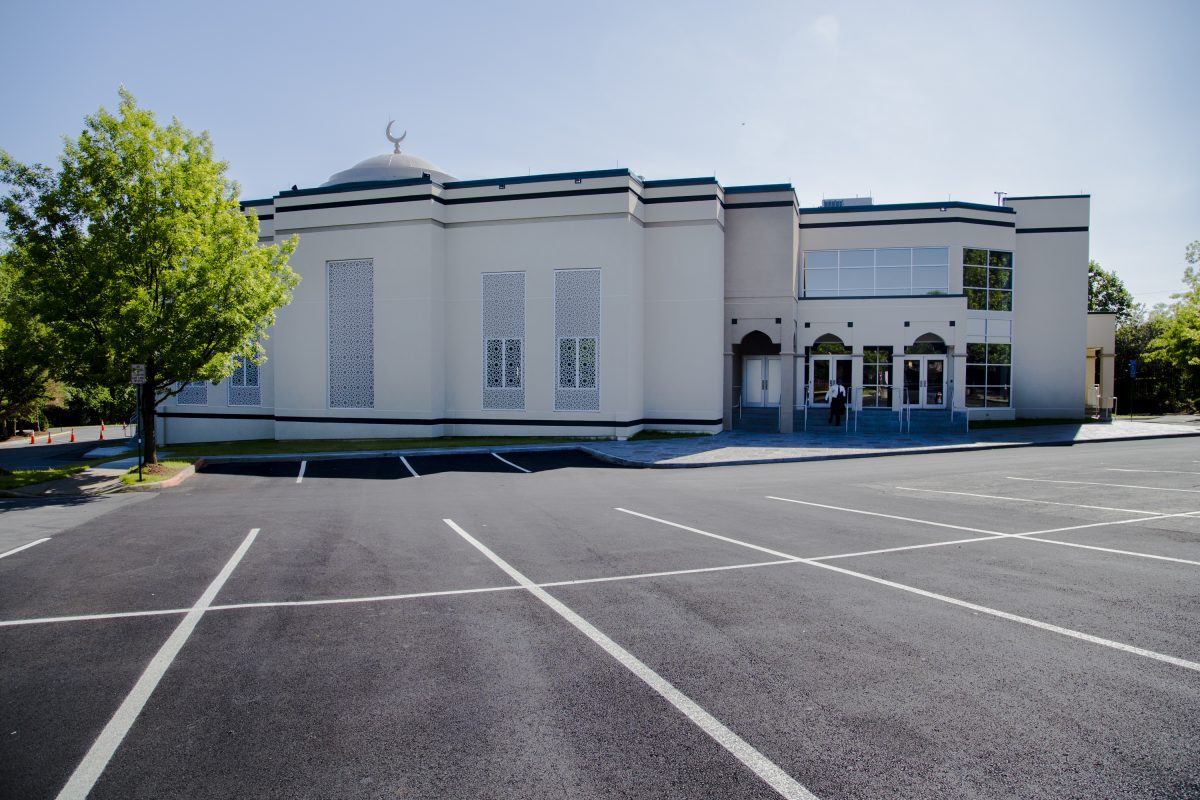 To Meet is More than a Start

From Washington the delegation moved to Chicago, where the minister met with the Council of Religious Leaders of Metropolitan Chicago. The Council is consisted of faith leaders of the various religious communities in Chicago and was initiated in 1984. One of the issues that brought the council to gether was the need to combat racism. Since then, the Council has evolved into a body that promotes equality, interfaith understanding and cooperation. 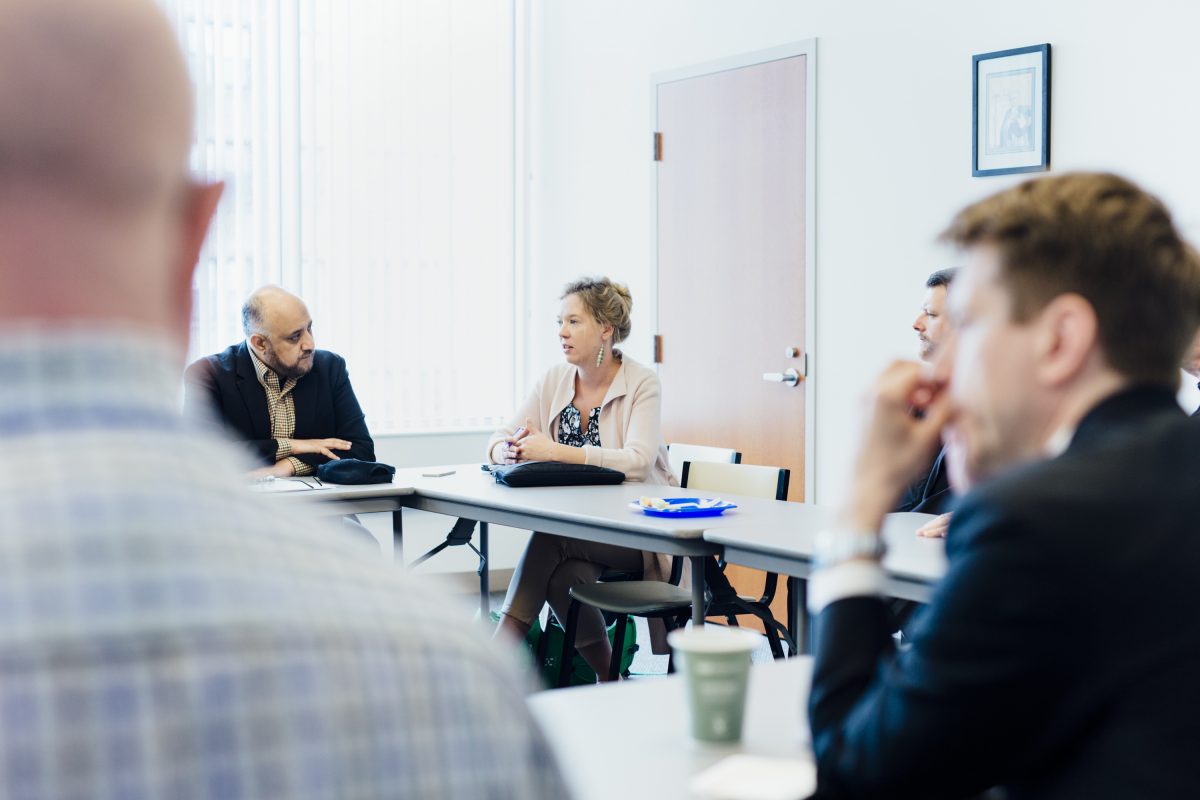 Project Coordinator Milla Perukangas from the Network for Religious and Traditional Peacemakers shares challenges faced by refugees in Finland.

Instead of having a council that publishes statements on timely matters – which it also does – the ultimate goal is to create a platform that bring communities of different faith closer. There is no need to agree, but rather  to discuss, exchange news and share the challenges faced in each community.

“Our aim is, that when something happens in one community or in the city, instead of thinking ‘let’s issue a statement’ we pick up the phone and call the community and ask, what is going on”, Rabbi Balinsky explained. 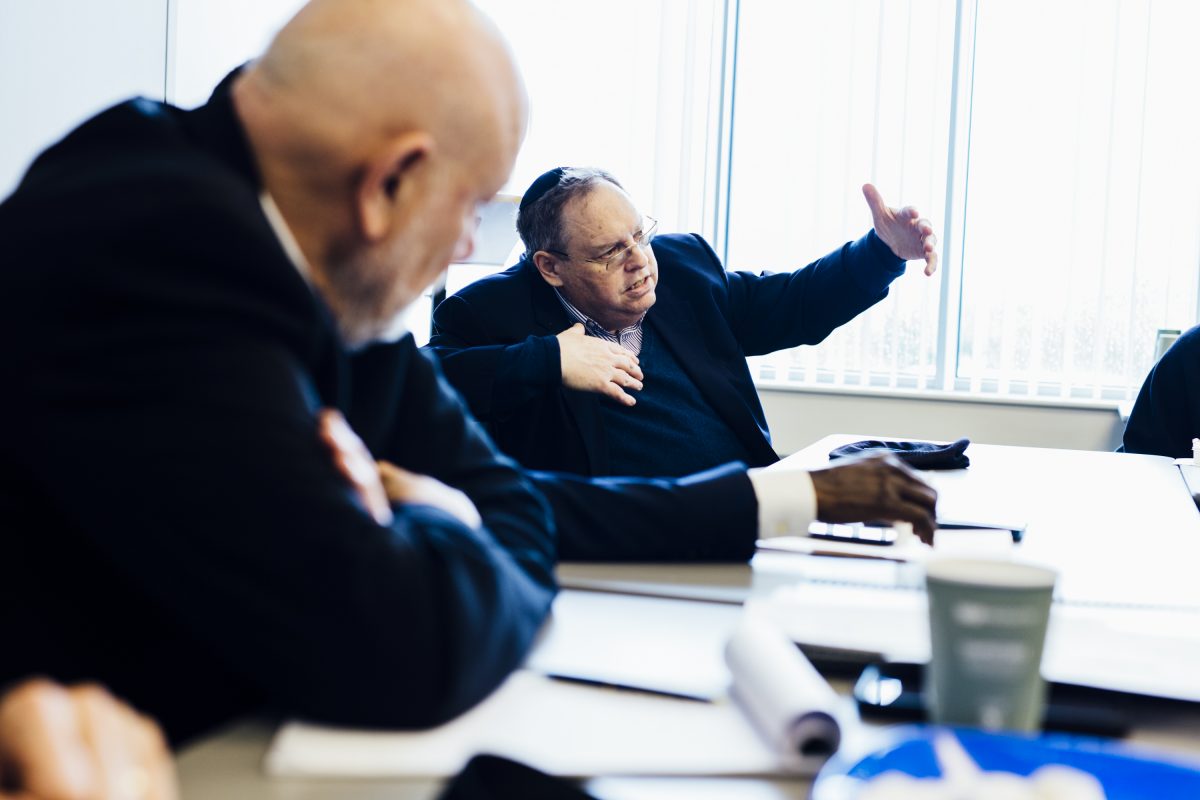 Rabbi Balinsky emphasizes the role of the Council as a tool for dialogue, knowledge sharing and building both professional as well as personal relationships between religious leaders.

The meeting was joined by the Executive Director Emeritus Reverend Paul Rutgers who found great resemblances between the context of the US at the of initiation of the Council and modern day Finland.

“For years I have been asked, what is it that the Council does”, Reverend Rutgers began.

“And I keep answering: we meet. I keep asking myself whether it is adequate, and I’m still not quite sure. But it is a start.” 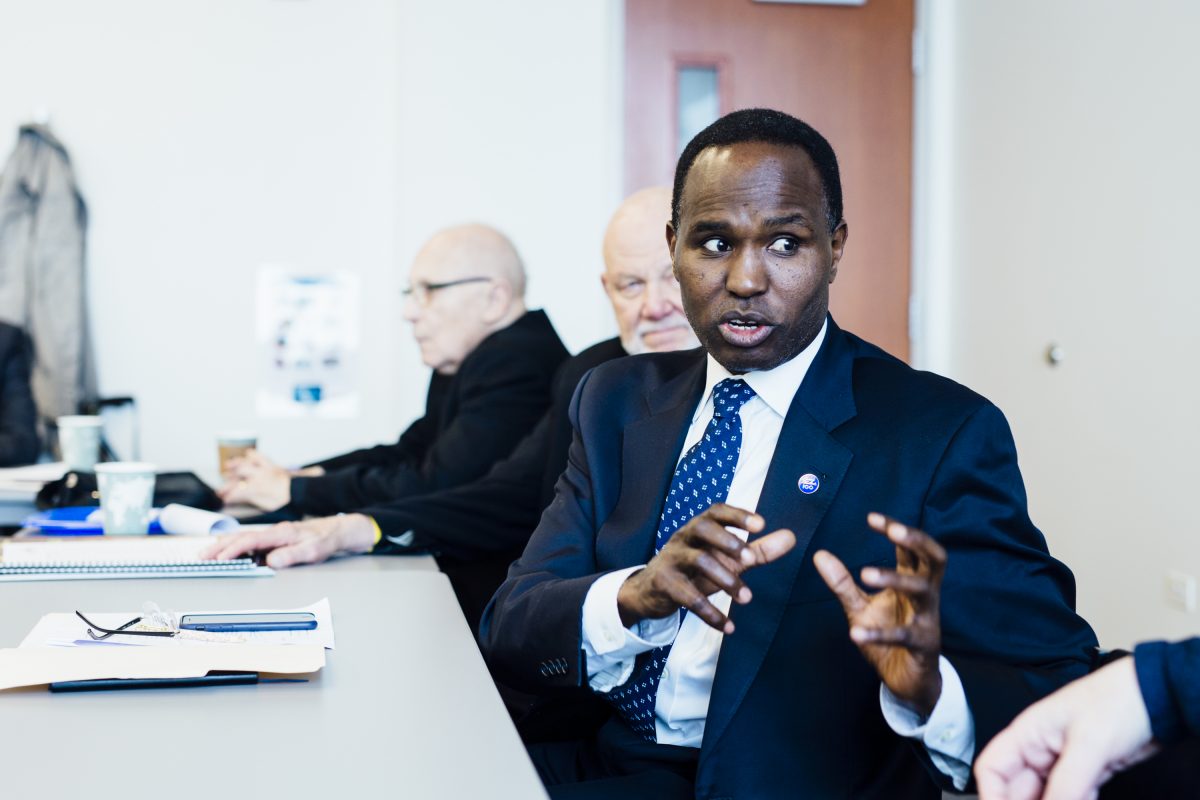 Director of the Network for Religious and Traditional Peacemakers Dr. Mohamed Elsanousi shares the story of Shoulder to Shoulder Campaign and reflects on the relationship between the government and religious communities in the United States. “Once the communities are united, engaging the state actors becomes possible,” Dr. Elsanousi says.

The travel program was created in collaboration with the Network Secretariat, Finn Church Aid and the Ministry of Employment and Economic Affairs Finland. Other items on the program in  included Brookings Institution, RefugeeOne, Inner-City Muslim Action Network, Mecca Center and Eli’s Cheesecake.

For more information in Finnish, have a look at: