Is National Reconciliation Possible in Somalia?

Despite the expressed commitment, little concrete initiatives have been taken forward since the initiation of the process almost a year ago. The goodwill and high-level political commitment has not been enough to overcome the difficulties and delays caused by regular political crises, including minister shuffles, lack of resources within the government and continuous attacks by al-Shabaab causing chaos in the capital and elsewhere. Furthermore, the lack of dialogue between multiple actors working with reconciliation and the reluctance to hand-over the coordinating responsibility to the appointed government institution – the Ministry of Interior, Federal Affairs and Reconciliation (MoIFAR) – has slowed down the process.

In October 2017, less than two weeks after a consultation meeting on reconciliation with Somali government representatives held in Helsinki, a truck bomb detonated in the middle of a crossroad in Mogadishu. More than 500 lives were lost, almost all of them civilians. Needless to say, this attack and its aftermath took all the capacity of the government for following weeks – even months.

Despite the setbacks, the chances to advance national reconciliation in Somalia are probably better than ever before since the beginning of the civil war in the 90s. In a workshop on national reconciliation organized together with MoIFAR, the Network, FCA and Creatives Associates in March 2018, a participant put it bluntly: “Somalis are very easy to reconcile, they are tired of hating. They crave for reconciliation”. 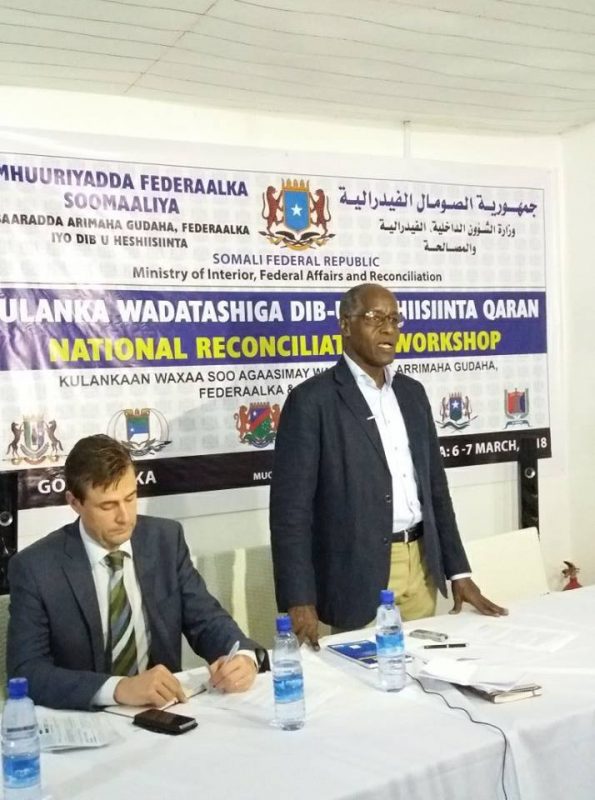 In spite of the growing momentum, neither exhaustion of the population nor isolated political will will be enough to bring nation-wide reconciliation to the country. Yet it seems that different forces have now come together to achieve this long-term goal. The need to start a genuine and inclusive process of national reconciliation has not only been highlighted by MoIFAR, the President and Prime Minister of Somalia, but by the UN as well. Other international organizations and many foreign embassies, such as Finland, have joined this work. MFA Finland has expressed its commitment to support the development of a national reconciliation framework through a joint project by the Peacemakers Network and FCA Somalia with the leadership of MoIFAR.

The objective of the work is to advance MoIFAR’s existing plan for the development of a national reconciliation framework, a national guiding document and a strategy for coordination and implementation of various reconciliation processes. The fundamental principle of the process is to ensure a participatory and inclusive process taking into account the grievances of all Somalis, including women, youth and marginalized groups. The aim of the work is to build the process on the Somali traditions of forgiveness and reconciliation.

As stated by Special Representative of the Secretary-General, Michael Keating, in the March workshop, Somalia has inherited a legacy of years of violent conflict, crimes, human rights abuses and experience of injustice, which have touched every Somali. Yet, there are traditional conflict resolution mechanisms, which can be utilized to manage, solve and prevent past and present disputes. With the support of religious and traditional actors, we need to prevent those mechanisms from eroding and complement, supplement and develop them when needed.

Furthermore, in order to create sustainable and lasting reconciliation, we need to learn from similar efforts in Somalia and elsewhere. Lastly, there are active conflicts, like the ones in Galkayo, Galmudug and Marka, which can not wait for the national framework, but need to be addressed immediately. Also these actions need to abide to the principles of the framework: an inclusive, well-coordinated process led by Somalis.

Coming back to the question presenting in the title, it is worth to revisit the words of the Minister of Interior, Federal Affairs and Reconciliation Abdi Mohamed Sabriye. In the March consultations he said:

“For genuine reconciliation to take place, Somali people have to firstly recognize the eminence and significance of their unity, togetherness and interdependence — no one can survive without the other.”

For more information, have a look at: