Since its inception in 2013, the Network for Religious and Traditional Peacemakers has grown from a small UN-led initiative to a coalition of over fifty organizations working together to build bridges between grassroots-level peacemakers and global players in order to strengthen international efforts to build sustainable peace. During the four-year tenure of former Executive Director Antti Pentikäinen, the Network made significant strides toward fulfilling its mandate to collaboratively support the positive role of religious and traditional actors in peace and peacebuilding processes. 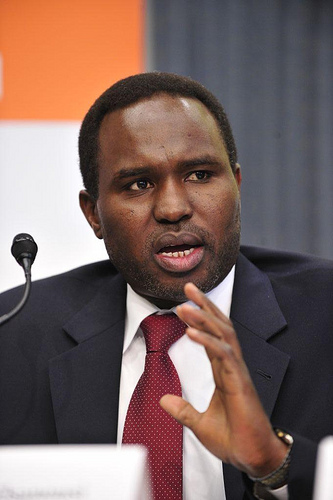 “As we begin this new chapter of our work, I am delighted to see Mohamed Elsanousi step into the Executive Director role, and I look forward to supporting him as he guides the Network into the future,” said Pentikäinen, who will lead the Network working group on reconciliation. This includes research on the impact of reconciliation with Princeton University and the Center for Theological Inquiry.

Dr. Elsanousi has been with the Network since 2014 and previously served as the Director of the Network’s Washington, DC office. “I am humbled by the appointment and the trust the leadership has shown me. I am thrilled to continue building on what we have already achieved together and crafting a clear and inclusive strategy to further localize the efforts of religious and traditional actors to build peace in the most challenging contexts.”

Dr. Elsanousi’s selection as the Executive Director was also welcomed by the Network’s UN partners. “As the UN redoubles its commitment to working with religious actors to address some of the most pressing challenges facing their communities, we are thrilled to strengthen and expand our partnership with the Network, with Dr. Elsanousi at its helm,” said H.E. Adama Dieng, Under-Secretary-General and Special Adviser of the Secretary-General on the Prevention of Genocide.

Dr. Azza Karam, Senior Advisor on Culture at the United Nations Population Fund, echoed these sentiments: “Dr. Elsanousi’s reputation as a strategic convener of diverse actors, a responsible manager of interreligous and intercultural service for peace, and a leader confident in recognizing and building on the achievements of those who went before him, positions him very well to take the Network forward in the years to come.”

As the Secretariat of the Network since 2013, Finn Church Aid also expressed its wholehearted support and enthusiasm for the appointment. “It has been great to witness the vigor and drive with which the new Executive Director has taken on his role. Mohamed is known for his broad personal networks and networking capacity, which will be a significant asset as the Network continues to grow,” noted Jouni Hemberg, Executive Director of Finn Church Aid.

Dr. Elsanousi’s appointment was announced at the Network’s 8th Advisory Group Meeting on May 4. Drawing on the evaluation concluded in March, the meeting focused on discussions on further development of strategy and structure. “The evaluation offered concrete recommendations, and Dr. Elsanousi made it clear he will make good use of them as he continues the further development of the Network. The Network is solidifying its position as a significant partner to the international community and will continue to build on models that have proven useful,” said Tomi Järvinen, Director of International Cooperation at Finn Church Aid.