Religion and Politics – A Fine Line

If religion is part of the problem, it is part of the solution. This is the one-liner the Minster of Foreign Affairs of Finland Timo Soini believes in and repeats. He said it in his speech at the Alliance of Virtue conference in Washington DC, he wrote it in his blogpost a week later, and slips it to his first answer in an interview with the Peacemakers Network. Solutions to conflicts do not come with foreign interventions and force, the minister says. Solutions to conflicts are found at the core of their cause.

Having said this, Mr. Soini is quick to add, that a conflict involving religion does not translate to being a religious conflict. If religion is part of the problem, it is not necessarily the cause of the problem.

“It is not religion that incites violence. It is the people who do,” the minister elaborates.

Mr. Soini shares his thoughts two weeks after the Alliance of Virtue conference. The conference brought 300 religious leaders representing Abrahamic faiths together to form an alliance to protect religious freedom, strengthen dialogue, and build peace. The conference was organized by the Forum for Promoting Peace in Muslim Societies, the Network for Religious and Traditional Peacemakers and supported by other American based religious organizations. The minister was one of the key-note speakers at the event. 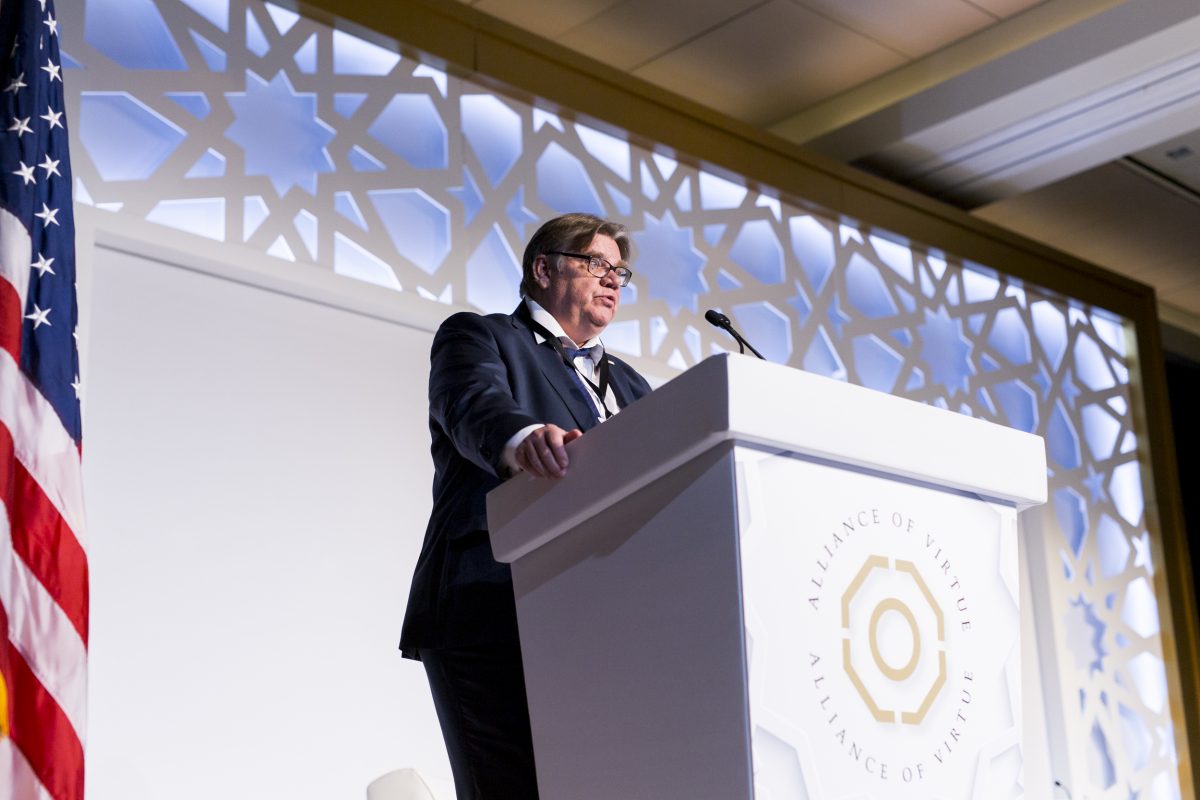 Minister for Foreign Affairs Timo Soini holds a keynote speech at the Alliance of Virtue conference.  In his speech the minister emphasised that freedom of religion and the protection of religious minorities needs to be a priority of all foreign policy.

Participation in the event was not something tasked for the minister as a state duty. It was something he wanted to do. A speech in front of a ballroom of religious leaders and actors following the address of a Sheik was not a normal day at the office. Yet, for the minister it made perfect sense.

Foreign affairs consist of more than security politics and bilateral state-level diplomacy, the minister says. People are not governed by national legislation alone. The everyday lives of people do not revolve around politics. They revolve around birth, baptism, confirmation, marriage, and death – communities bound together by rituals and faith, minister Soini states.

The role of religion as part of society – and politics – does not diminish by ignoring it. Yet, the minister does admit that his approach is far from the mainstream in Finland. The minister’s interest in working with religious leaders is a theme often speculated and frowned upon in Finland. Even though the Evangelical Lutheran church and state are one in Finland, the visibility of religion in day-to-day, public politics is close to nil.

An especially contested topic has been the minister’s participation in the annual national prayer breakfast hosted by the United States Congress. For Mr. Soini, the event has been a valuable opportunities to meet people with strong networks reaching both high-level decision-making as well as grassroots impact. The authority of religious leaders is no less than the legitimacy of leaders of states, politics or businesses. What sets religious actors apart for the other three is their connection to the grassroots, to the people regardless of social strata, party or field of employment.

Even though the prayer breakfast was one of the highlights of the minister’s recent visit in Washington, the minister does recognize the risks of dissolving the line between religious and political power. The minister repeats his initial statement. It is not religion that cause conflict, it is the people using religion to fuel conflict that do. The use of religion to legitimize hate, violence, and oppression are themes the minister is well aware of. This trend is something the minister has followed both in conflict contexts but also in countries traditionally regarded as peaceful and stable – including Finland.

“Using fear against the other is a very powerful tool to legitimize discriminatory decision-making. Hard decision based on the stigmatization of a religious minority is something that diverts attention from, for example, economic issues or the lack of freedom of press. It does it very efficiently,” the minister highlights. Unfortunately, such methods rarely strengthen safety in the long-term.

In its annual report, The Global Peace Index highlighted that the rise of European populism resulted in the deterioration of positive peace in 19 out of 36 countries in Europe. A noticeable decrease was seen in the European levels measuring the Acceptance of the Rights of Others, which deteriorated by 4.5 per cent, eleven times more than the global level of 0.4 percent. 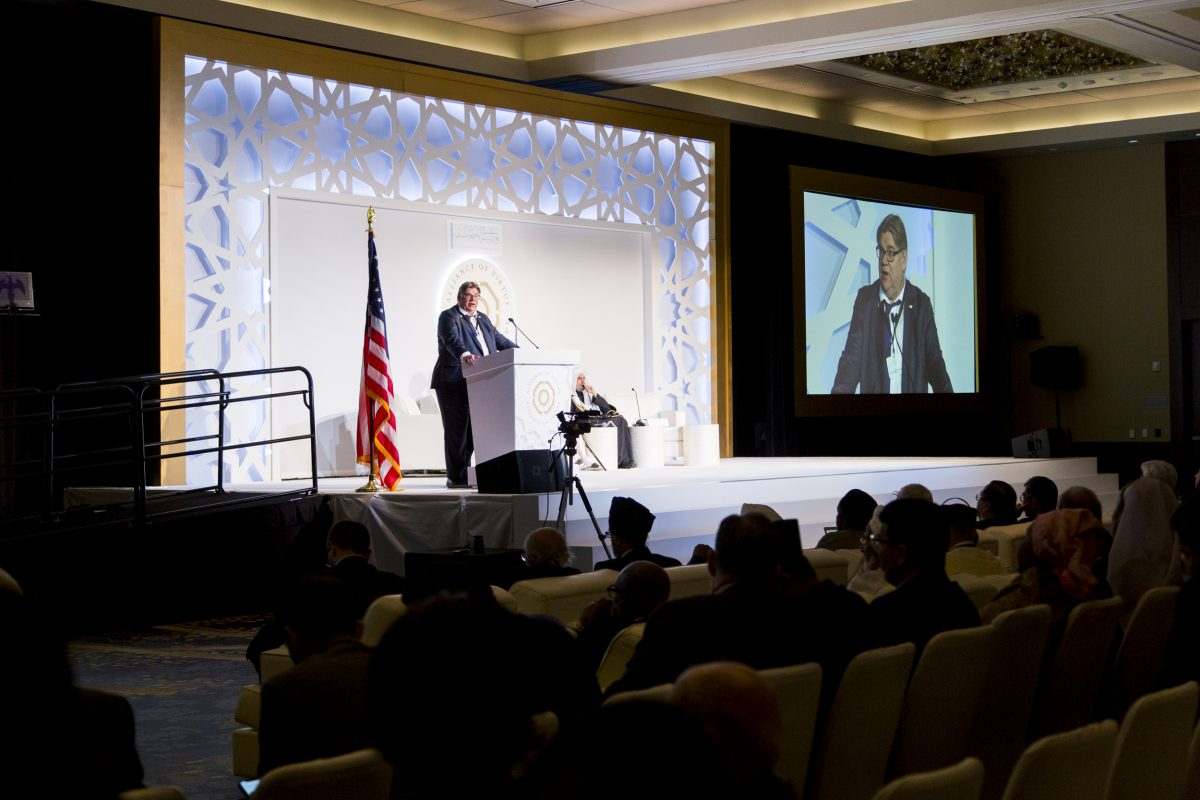 The minister addressed 300 religious actors and leaders in Washington DC as part of the Alliance of Virtue conference. The day was opened by Shaykh Abdallah Bin Bayyah, President of the Forum for Promoting Peace in Muslim Societies.

Religion in the Forefront of Conflict

Even though it is easy to speak of the importance of religious actors in conflict transformation, these words often remain lip service with little change in the current paradigms of prevention and peacebuilding. Yet, there is an urgency involved. According to research by the University of Uppsala, in the beginning of the 70’s only a few conflicts had religion as a factor. By the end of 2015, the number of conflicts with a religious component had surpassed 50 percent. Statistical data is clear, yet the reasons behind the trend remain debated.

Instead of looking for a reason behind the developments, the minister turns the discussion to his own family history. This year will mark 100 years from the Finnish civil war, a war that divided a freshly independent nation and left close to 40 000 dead.

“It doesn’t take much for me to imagine the divisions caused by the war. It is easy for me to feel the bitterness from those years,” the minister, born more than three decades after the civil war, says.

“The fact that violence stops, does not mean that the conflict ends.”

Sustainable peace requires reconciliation and healing. This is work that takes years, decades, if not generations. The cessation of violence is just one step towards peace, and it is in this where the role of religious actors needs to be recognized.

In his speech at the Alliance of Virtue conference, the minister called for the establishment of a multi-religious body consisting of prominent religious actors. This body would be tasked to support mediation and reconciliation and work to prevent, resolve and heal conflicts.

“This body needs to be based on legitimacy, authority and trust. The body will not last if it is something that we simply decide to build. Again, the will needs to come from inside,” Mr. Soini says. The minister compares the body to The Elders, a network of older statesmen, peace activists, and human rights advocates, brought together by the late president of South Africa, Nelson Mandela. The goal Mandela set for the Elders was to use their collective experience to resolve conflicts no one else seemed able to solve.

“When religious leaders come together, a theme that comes naturally is peace. A shared vision of peace does not demand that we agree on our beliefs, that we agree about afterlife and the like. Peace is a vision that we all can share and work for,” the minister says.

In a world were close to 50 percent of peace agreements fail within five years of signing, the demand to think outside the current peacemaking-box is clear. Brining religious leaders to the negotiation tables, using their authority to change the course of hate, or recognizing the potential of these actors in supporting a sustainable transition from conflict to peace is a strong start. 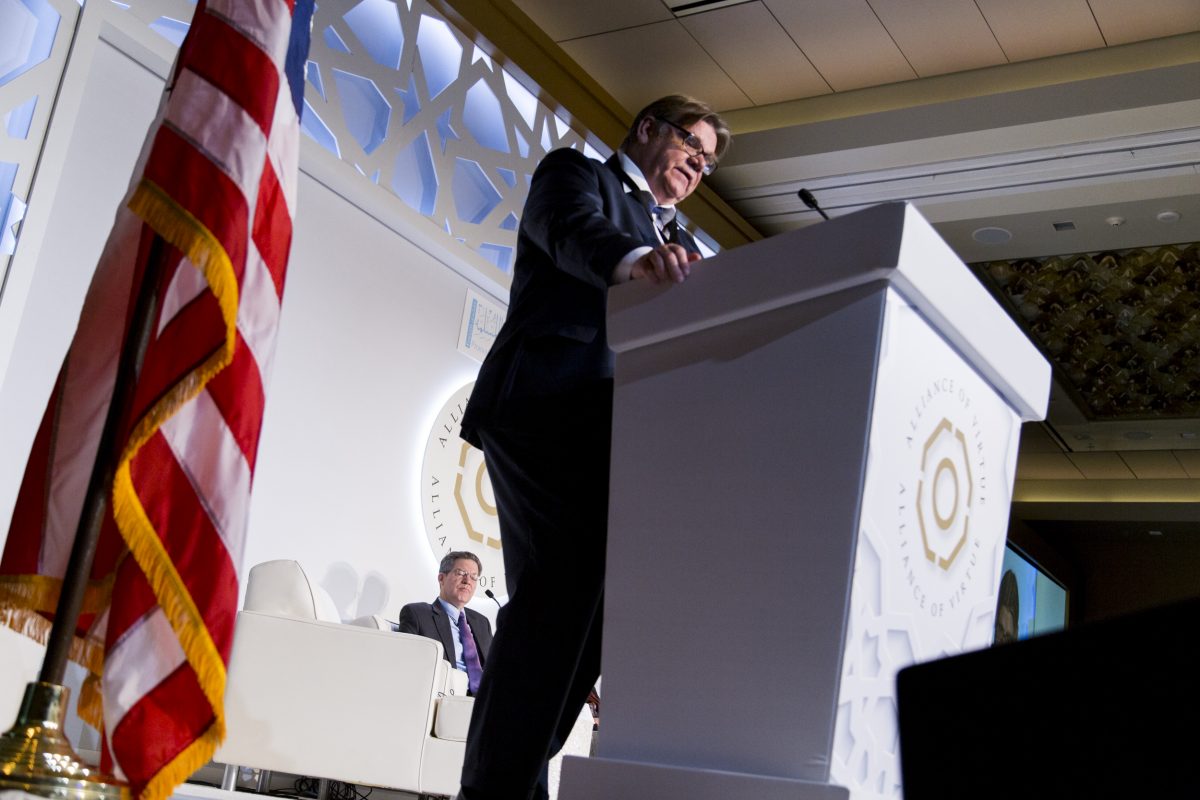 Minister Soini’s speech followed the speech of the United States Ambassador-at-Large for International Religious Freedom Sam Brownback. The newly appointed ambassador gave his first speech as an ambassador at the Alliance of Virtue conference.

Even though the minister has come to recognize the positive potential of religion and religious actors in mediation, he has also come to recognize that not all do. The topic of religion, mediation and conflict is far from an easy one in the minister’s sphere of references. The minister mentions, that, for example, on the EU level the theme is taking baby steps – if event that. The minister does not elaborate on the subject. In Finland, EU politics fall on the desk of the prime minister.

In spite of this, the niche is there, and according to minister Soini, Finland has a strong potential of being a player in the field.

“Finland is not a neutral country. We are part of the West, but we do not have the same baggage as other actors might have. We are able to work as honest brokers in contexts where more powerful players cannot,” the minster says.

The minister has a bit more than a year to go until the next round of elections. With the currently political climate, it is highly unlikely that Mr. Soini will continue with a seat in the government, let alone as a minister.

“When you take the role of the minister, the will of the ministry is continuation and that things move forward with a long-term plan. This is a good and understandable approach,” the minister says.

But this is not what the minister’s role is about, the minster adds. It is not only about theoretical debates and doing things the way they have always been done. The task of the minister is to be part of ongoing debates and bring talk to action.

“But these discussion, it will take time,” the minister states. “I have always wondered the stamina of peacebuilders. No matter how many times a negotiation fails and trust is broken, they still have the will to continue. This is something I have come to admire.” 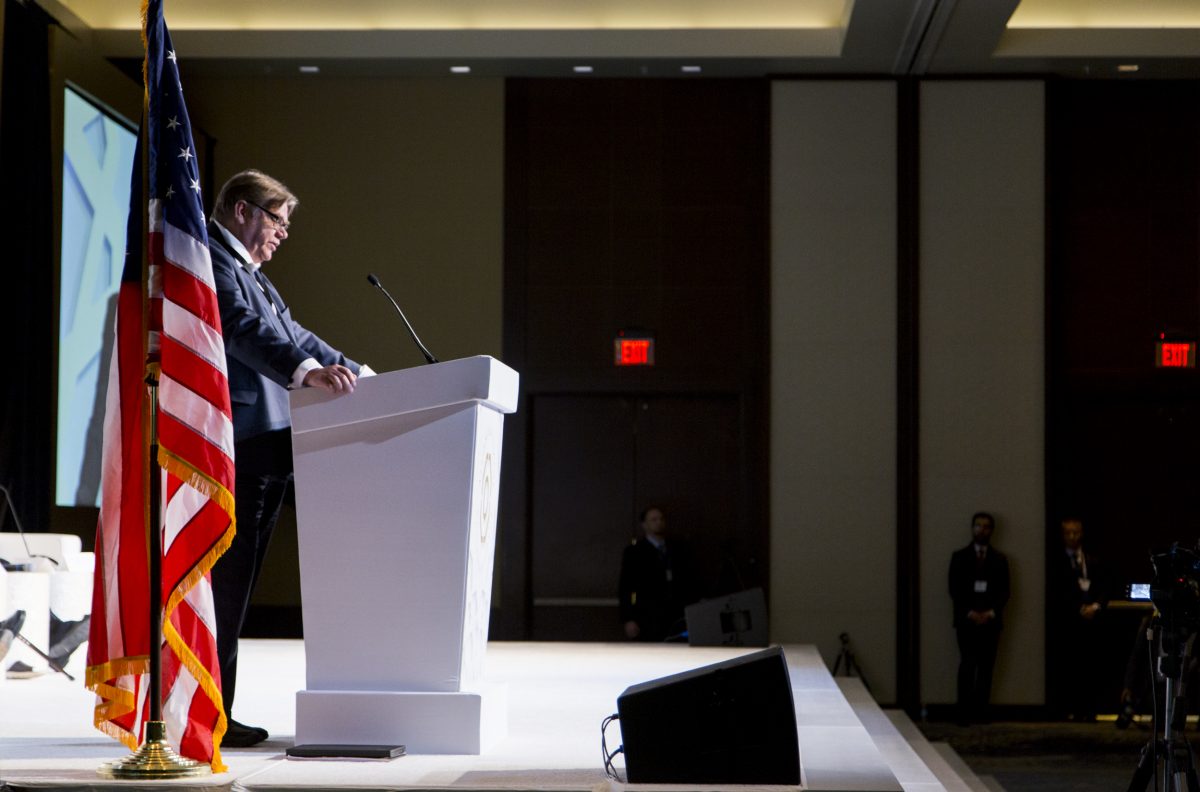 For more information of the Alliance of Virtue conference, have a look at: