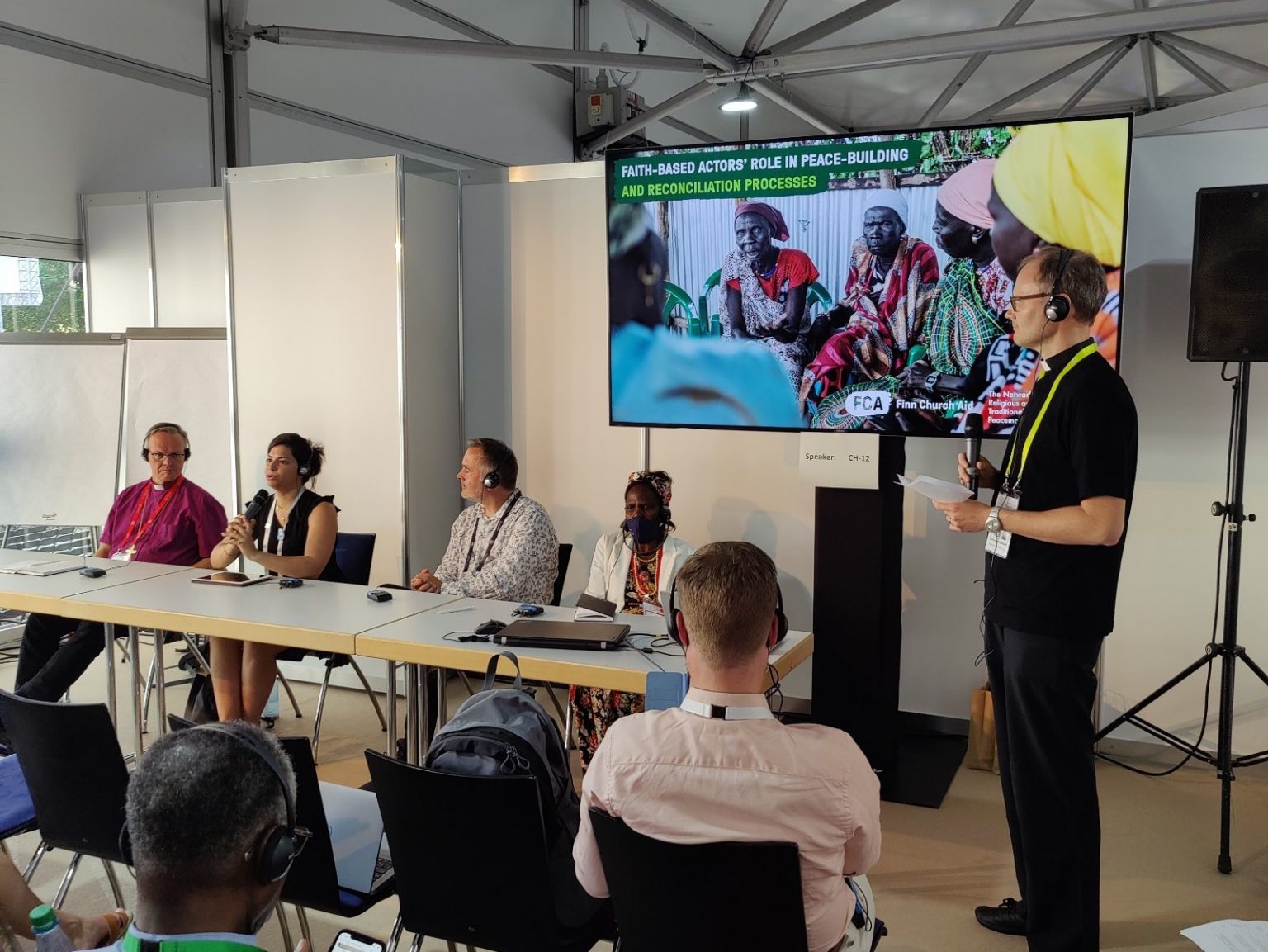 The war in Ukraine coloured the discussion at the 11th Assembly of the World Council of Churches (WCC), taking place in Karlsruhe, Germany between August 31st and 8 September 2022. Also highlighted was the role of the churches in peacebuilding and reconciliation, which led to a lively panel discussion on 5th September, organised by Finn Church Aid and the Network of Religious and Traditional Peacemakers.

The title of the panel discussion was “Faith-based actors’ role in peace-building and reconciliation processes”. Taking part were Archbishop of the Evangelical Lutheran Church of Finland, Most Rev. Dr. Tapio Luoma; Moderator of the WCC Central Committee, Dr. Agnes Abuom from the Anglican Church of Kenya; Ms Sally Azar from the Evangelical Lutheran Church in Jordan; and the Holy Land and Mr Matthias Wevelsiep from the Network of Religious and Traditional Peacemakers.

Since over 80% of the world’s population self-identify as as members of a religious group, religious actors play a critical role in peacebuilding, conflict transformation and reconciliation processes around the world. Mediators from a religious background work within communities, while tradition and faith serve as motivation and guide for peacebuilding.

The panel emphasised the importance of religious leaders and communities as well as other faith-based actors in peace processes.

“Looking globally, religious leaders have a lot of influence in their own communities, but also a great responsibility to act equitably and promote justice and peace with their own activities,” said Archbishop Tapio Luoma.

Moderator of the WCC Central Committee Agnes Abuom also emphasised the importance of ecumenical organisations as platforms for dialogue and peacebuilding.

The World Council of Churches was founded in Amsterdam in 1948 and includes 352 member churches from more than 120 countries. The Assembly is WCC’s highest decision-making body and meets every eight years. WCC’s mission is to promote Christian unity. Work to promote peace and justice has also been a key element of WCC’s operations since its foundation.

The Network for Religious and Traditional Peacemakers Executive Director and Senior Specialist for Inclusive Peace serve as ‘Thursdays in Black’ Ambassadors.  Thursdays in Black grew out of the World Council of Churches (WCC) Decade of Churches in Solidarity with Women (1988-1998), in which the stories of rape as a weapon of war, gender injustice, abuse, violence, and many tragedies that grow outward from such violence became all the more visible. But what also became visible was women’s resilience, agency and personal efforts to resist such violations.

The campaign is simple but profound. Wear black on Thursdays. Wear a pin to declare you are part of the global movement resisting attitudes and practices that permit rape and violence. Show your respect for women who are resilient in the face of injustice and violence. Encourage others to join you.