Religious leaders and representatives of faith based organizations from the Americas convened at the United States Institute of Peace (USIP) for two days to discuss and propose regional strategy measures to prevent and counter incitement to discrimination, hostility and violence. In recent years, there has been a significant increase in violence amongst and against different religious groups. These incidents of violence have often been accompanied with hate speech, which lead to atrocity crimes. With social media’s wide grasp and public discourse on the rise, this group felt it was important to come together to develop an action plan to implement the global plan of action for the prevention of incitement developed by religious leaders from around in the world in Fez, Morocco on 23-24 April 2015.

The meetings started on Sunday, February 28th with a site visit to the Islamic Center of Fredericksburg in Virginia, to meet with a community that recently experienced very public anti-Muslim sentiment. The Islamic Center held a community town hall meeting to discuss a proposal to build a new mosque when a shout in the crowd turned the meeting into a shouting match denouncing Islam. The participants had an opportunity to hear the testimonies from religious leaders and practitioners at the USIP, the impact of those events on the center’s community and had an opportunity to share resources to help the community move forward. 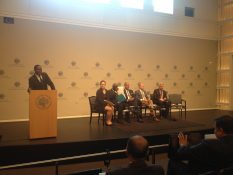 Dr. Mohamed Elsanousi, Director of the Network in DC, leading a panel discussion.

At the opening sessions of the meeting on Monday, February 29th, participants were joined by various representatives from states, governments, religious organizations. Adama Dieng, United Nations Special Adviser on the Prevention of Genocide, noted that “Religious leaders from across the Americas are already taking courageous action to prevent and respond to all forms of racism and incitement to violence based on identity. They must be supported nationally, regionally and internationally”.

Over the two day meeting, participants developed strategies and recommendations to map existing initiatives, denounce incitement and develop an action plan to counter the narrative that underscores hate speech, monitor and publicize acts of hatred and incitement that could lead to violence, strengthen collaboration with mainstream and social media actors, develop alternative messages in response to hate crimes, build robust multi-faith social action and strategic communication campaigns and develop specific educational tools to promote the values of diversity and respond to incitement to violence.

Specific to the Central and South American context, religious actors highlighted the importance of historical memory and truth seeking processes, the need to promote debates on gender equality within religious institutions, the prevention of gender-based and domestic violence, and the criticalness of and strengthening engagement of the United Nations in regional processes to address territorial disputes.

In addition, all parties agreed that a South and Central  American network aimed at tackling violence associated with criminal activity against women and youth, and enhancing the protection of religious leaders who are courageously working to prevent and counter hatred and radicalization, must be established.

Although challenges will always be present, participants are hopeful that the merits of their strong-hearted efforts and those of this meeting will foster positive results of dialogue and cooperation.