A young, trendy and engaged crowd filled the sunlit room of Soutupaviljonki, the Rowing pavilion, in Helsinki on Friday afternoon the 4th of August. Located next to the historical rowing stadium built for the Helsinki summer Olympics of 1952, the atmosphere in the pavilion was a combination of old and new – flaking paint and start-up vibes.

The crowd of over one hundred had come together to witness the finale of the League PeaceTech Program organized by Helsinki Think Company, a hub for young academics, innovators, entrepreneurs, and curious minds. On the final day of the one-month peacetech idea accelerator, participating groups took the stage to pitch their innovations for the anxious crowd.

The crowd stretched their necks as the keynote speakers took the stage. The evening was opened by longstanding member of parliament and former minister Erkki Tuomioja.

“Neither social nor technological innovations alone can solve all conflicts,” Tuomioja began his speech.

“Together we may do so.”

As a devoted historian and chairman of the Historians Without Borders Finland, Tuomioja identified both the burden and potential of technology in shaping the world. Renewable energy, innovative solutions to water scarcity, arms trade, nuclear weapons, and global warming are all the outcomes of technological developments.

“The value of technology is the value given to it by its user,” Tuomioja said and urged for innovations supporting sustainable development and equality.

According to Tuomioja, the promise of peacetech is more than the tools it produces.The power of peacetech is in its ability to bring professionals from different backgrounds together to find solutions to global problems. This in itself is a change for the better. 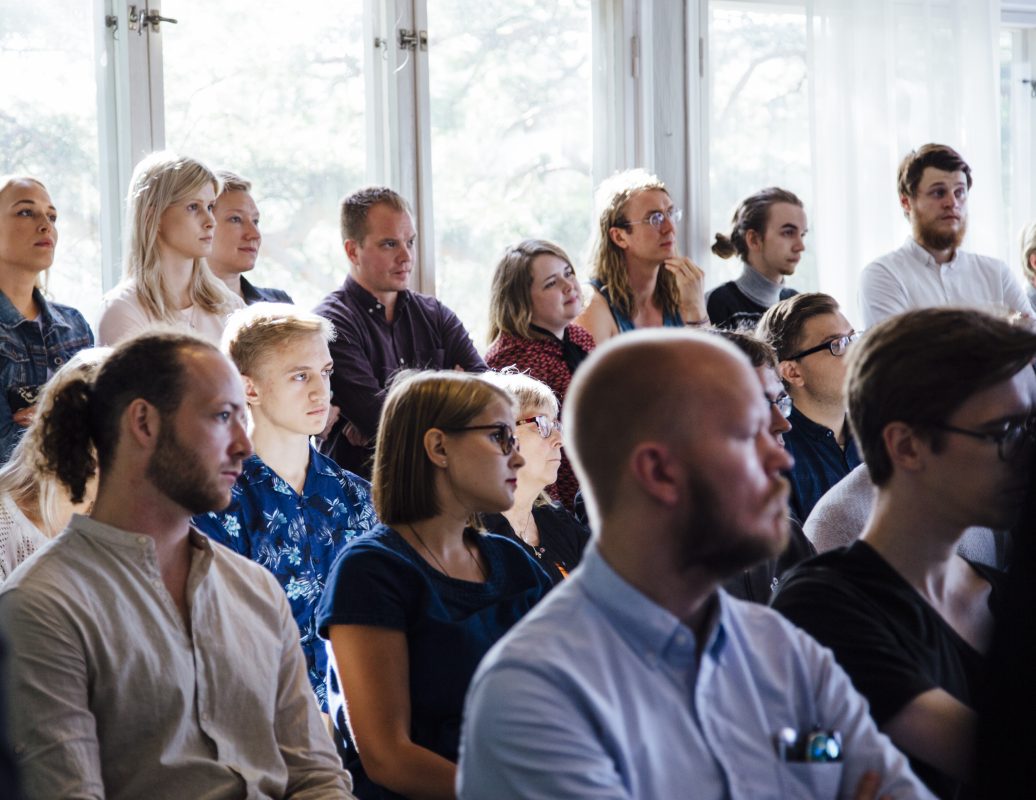 The League PeaceTech Program brought three Finnish NGOs working in the fields of peace and equality to join forces with the start-up scene surrounding Helsinki Think Company. The NGOs provided the Program with timely challenges to be solved by peacetech solution. In the beginning of July, the Peacemakers Network provided the program the challenge: “How to utilize peacetech to address the causes of radicalization and to prevent violent extremism?”

The first group developed a concept for an escape room, CultureScape, targeting secondary school students.  CultureScape is designed to feature the story of a returnee or foreign fighter, and aims to provide students and young adults the possibility of exploring the causes and effects of violent extremism through an immersive experience.

The second group approached the challenge by digging deep into radicalization processes. In the end, the group identified information, or the lack of it, at the core of the recruitment of violent extremist groups.

The group designed an application called Marshmallow aimed at bridging the gap between experts and at-risk youth by providing a safe space to ask pressing questions on themes related to identity, culture, religion, society, and life. Professionals and experts from organizations and institutions specialized in the themes would in turn be given the chance to provide answers.

Other innovations included PeaceTracker, a tool for the documentation of violence in a given area; Varamaraani, a game raising awareness and understanding of the gender spectrum; and Kaiku, an online platform providing a safe space for women to report violence.

While no winners were declared in the Program, the jury unanimously gave team Marshmallow special acknowledgement. Consisting of representatives from the Peacemakers Network, the peacebuilding organization CMI, and human rights organization Seta, the jury agreed that Marshmallow succeeded in creating an innovation that could be used to support the work of all three NGOs.

“When looking at peacetech from a peacebuilding perspective, its key prospect lies in communication. Peacebuilding rests on the foundation of trust and dialogue, and technology can provide tools for strengthening these foundations,” Milla Perukangas, project coordinator of the Reach Out project of the Peacemakers Network, said after the finale.

“In order to address the root causes of a conflict in a sustainable way, information from the grassroots level is necessary. Peacetech is one of the tools that can create new avenues for collecting and analyzing information. This in turn will help us practitioners in better serving the people,” Perukangas continued and emphasized the potential of using technology for the creation of needs-based interventions to conflicts.

In spite of the strong promise and potential of peacetech, also Perukangas linked peacetech with the question of sustainability.

“If we think of how much technology has taken human kind forward, the positive potential of peacetech in shaping the world is enormous. On the other hand, we are currently dealing with the side effects, such as climate change, of this very same technology,” Perukangas pointed out.

“Peacetech is technology and social sustainability combined. In the end, this is the potential of peacetech.”