“I firmly believe in the power of faith leaders to shape our world for good,” António Guterres, Secretary-General of the United Nations, began his speech at the United Nations Headquarters at the launch of the action plan addressing religious actors and their role in preventing violence.

“Yet around the world, we see how religion is being twisted – cynically manipulated – to justify incitement to violence and discrimination,” the Secretary-General continued, and put into words the global challenge faced by faith groups and religious actors around the world – the exact challenge the historical Plan of Action seeks to address.

The action plan titled The Plan of Action for Religious Leaders and Actors to Prevent Incitement to Violence that Could Lead to Atrocity Crimes was launched on Friday the 14th at a meeting at the United Nations Headquarters in New York. The launch marked a significant milestone both in the history of the United Nations and the history of the Peacemakers Network. The Plan of Action was the first of its kind to highlight the role religious actors have in preventing violence. To add to this, the Plan of Action brought exceptional attention to the work done by religious and traditional peacemakers and The Peacemakers Network.

“This meeting was unprecedented in terms of engaging religious and traditional actors with the highest level of the UN,” Dr. Mohamed Elsanousi, Director of the Peacemakers Network Washington DC office, described the launch event.

The opening remarks of the Secretary-General were followed by a keynote address by Shaykh Abdallah Bin Bayyah, President of the Forum for Promoting Peace in Muslim Societies, and Faisal Bin Muammar, Secretary-General of the KAICIID Dialogue Centre. The speeches were followed by three panels in which the content of the Plan of Action, its implementation and the role of religious leaders in reaching the Sustainable Development goals were discussed. The panels were participated by, for example, Archbishop Bernardito Auza, Apostolic Nuncio and Permanent Observer of the Holy See to the United Nations; Sheikh Saleh bin Humaid, Imam of the Grand Mosque of Mecca; Rabbi Burton Visotzky, Professor at the Jewish Theological Seminary; and Reverend Kyoichi Sugino, Deputy Secretary-General of Religions for Peace.

The drafting of the Plan of Action began in 2015 in the Moroccan city of Fez. The Plan of Action was developed and organized by the United Nations Office on Genocide Prevention and the Responsibility to Protect, with the Network taking a supportive role and acting as an active member of the advisory committee. The Network, for example, participated in the planning of the first meeting in Fez and the subsequent five regional meetings held on five continents. Within the duration of the two-year Fez Process, the Network acted as one of the advisors, organizers and funders for the various phases of the process.

The Network also cosponsored the launch and the reception following the launch. The reception was moderated by the Network and addressed by Amina Mohammed, Deputy Secretary-General of the United Nations.

Until today, the Fez Process has involved 232 religious actors from 77 countries. Participants in the process have included Buddhists, Christians, Hindus, Jews, Muslims and Sikhs from different groups and denominations, as well as representatives from various religious minorities, including Baha’i, Candomblé, Kakai, Yazidi, and humanists. At least 30 percent of participants at all meetings have been women.

“Religious and traditional actors were the ones who designed and participated in the execution of the regional conferences,” Dr. Elsanousi explained.

“Creating an action plan that engages the ones it addresses ensures that the final plan reflects the reality of the people it is designed for. This is directly linked to the successful implementation of the plan,” Dr. Elsanousi continued.

The wide engagement of religious leaders and actors, peacemakers and faith-based organizations was also emphasized by Secretary-General Guterres.

“I would like to pay tribute to the critical role of many partners, and in particular KAICIID, the Network for Religious and Traditional Peacemakers and the World Council of Churches,” the Secretary-General said in his speech. 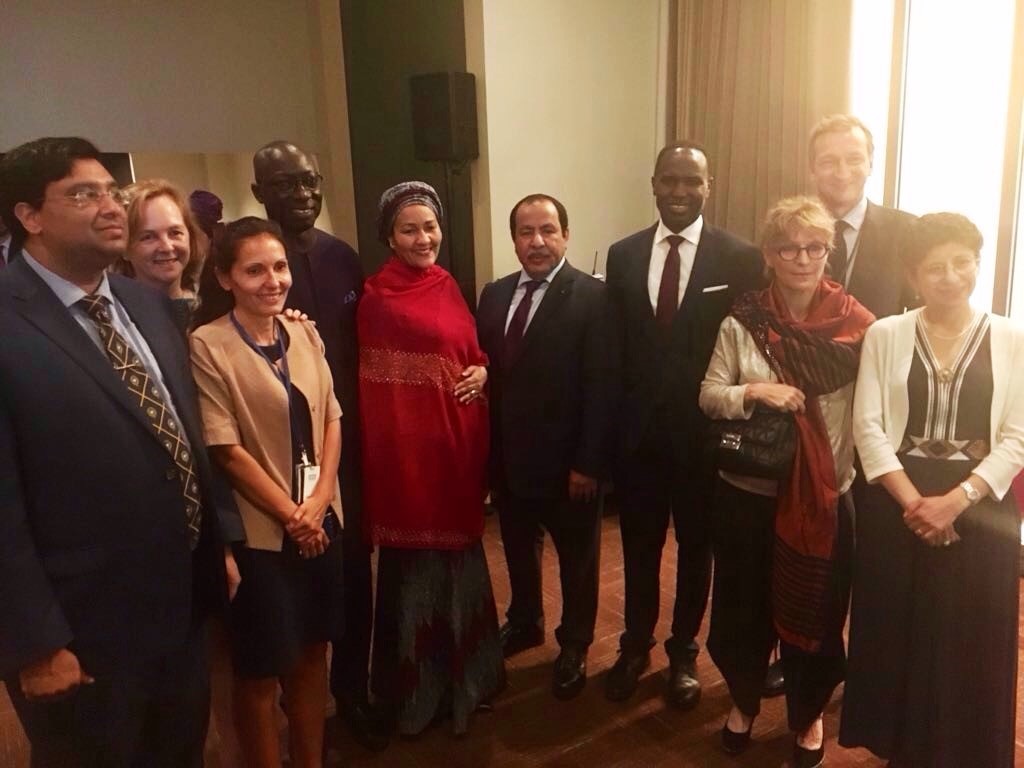 The Fez Process Advisory Committee together at the reception following the launch of the Plan of Action.

A Plan of Action to Address a Worldwide Challenge

The incentive to draft the Plan of Action developed years before the first meeting in Fez. The need for a joint action plan grew as a response to the alarming rise in hate speech and incitement to violence against individuals and faith communities. 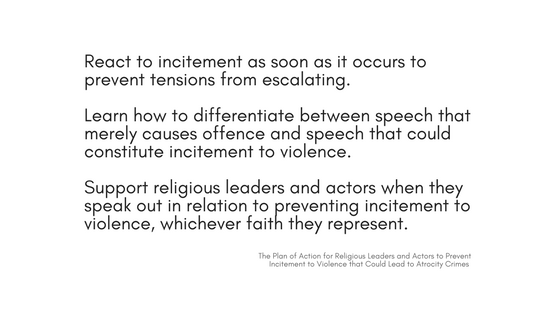 Examples of the recommendations found in the Plan of Action.

.“The Action Plan recognizes that there is a problem pertaining to incitement, and there are a number of religious actors orchestrating such incitement. For this reason it is crucial that religious actors have the ownership of producing a mechanism to address this particular problem,” Dr. Elsanousi said.

While the Plan of Action is intended to be used by religious leaders and actors, it also includes detailed recommendations for others, such as, States and State institutions, secular civil society organizations, and new and traditional media. 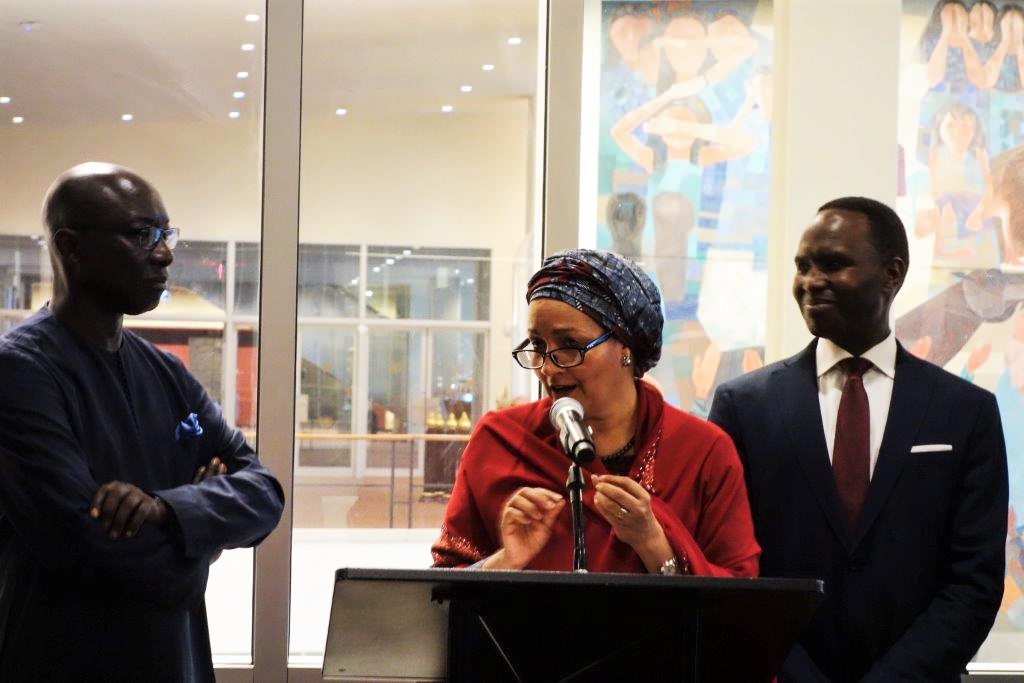 Amina Mohammed, United Nations Deputy Secretary-General, welcomes all participants to the reception of the launch of the Plan of Action. On her left Adama Dieng, United Nations Special Adviser on the Prevention of Genocide, and on her right Mohamed Elsanousi, Director of the Network for Religious and Traditional Peacemakers.

From Plan to Action

Even though conflicts have changed and shifted during the two-year drafting process, the challenges that sparked the development of the action plan remain as timely as before.

The following months and years will be pivotal for the Plan of Action. The Peacemakers Network is committed to continue cooperation with the UN Office on Genocide Prevention and its partners.

Just as in the process leading to the plan, the needs and knowledge of religious actors need to be in the center of actions.

“It can help to save lives, reduce suffering, and realize our shared vision of a peaceful, inclusive and just societies in which diversity is valued and the rights of all individuals are protected. Let us work together to prevent and end atrocity crimes and all affronts to human rights and dignity,” Secretary-General Guterres ended his remarks. 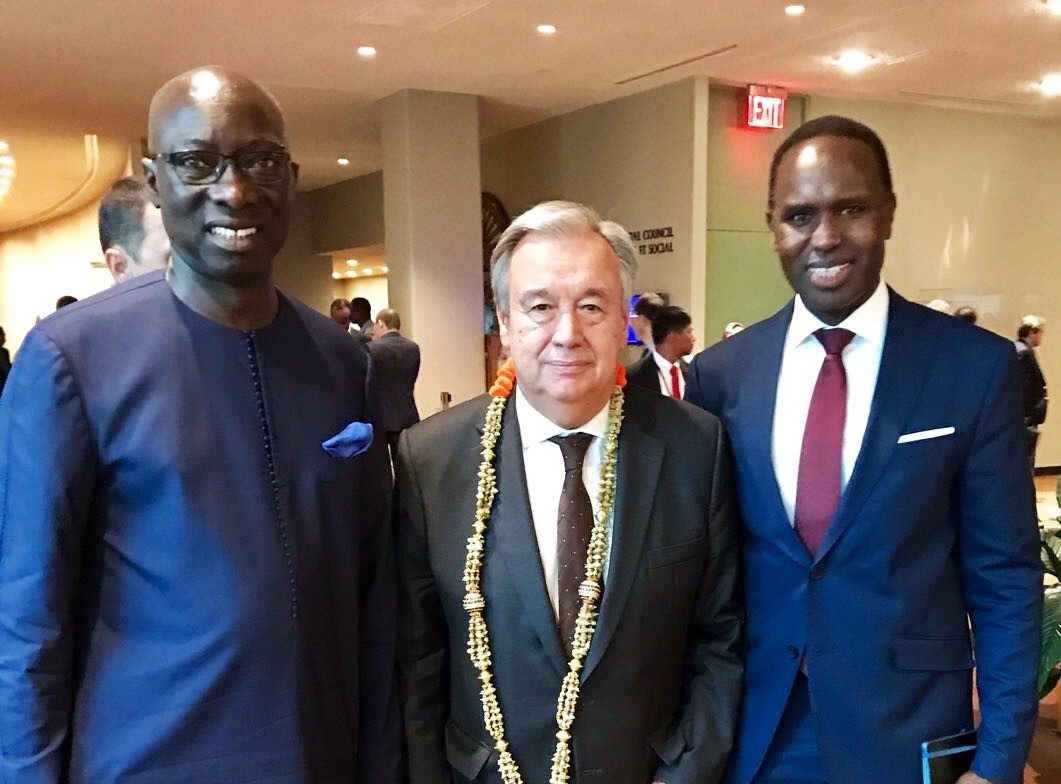 Adama Dieng, United Nations Special Adviser on the Prevention of Genocide, and Mohamed Elsanousi, Director of the Network for Religious and Traditional Peacemakers, together with António Guterres, Secretary-General of the United Nations.

The Plan of Action was developed by the United Nations Office on Genocide Prevention and the Responsibility to Protect, with the support of the Network for Religious and Traditional Peacemakers, the International Dialogue Centre (KAICIID), and the World Council of Churches (WCC).