The fragility of state institutions, health care system, economy as well as the perennial instability and persisting conflicts, makes Somalia one of the least prepared countries in the world to deal with the current global health crisis, COVID-19 pandemic. In addition to the instability and constant political crises, Somalia has been suffering from multiple natural disasters over the past years, including droughts, floods and most recently the invasion by locusts, leaving the country in a very vulnerable position and unprepared for a pandemic. Jumping from only three confirmed cases at the end of March to more than 600 confirmed cases at the end of April, and with a huge gap in information on the actual number of the cases,  Somalia is facing major challenges with no or very little capacity for testing and equipment for intensive care for those needing acute treatment.

In addition to the grave concern over the public health and economy, the pandemic is also likely to have destabilizing effect in Somalia. Not only does the loss of livelihood and medial resource scarcity raise concern as a source of further conflict, extremist groups are utilizing the pandemic in their propaganda to delegitimize the national authorities and international actors. Al-Shabaab, a violent extremist organization operating in Somalia and East Africa,is no exception. Despite the call for global ceasefire by the UN Secretary General António Guterres on April 17, 2020, al-Shabaab has ramped up its attacks around the country over the past weeks and associated the pandemic with “crusaders,” meaning foreign troops and UN and AU assistance missions, in Somalia. The group also has a worrying reputation of attacking aid deliveries and using emergencies to garner support for its goals. In addition, the inward-looking approach to the crisis by most of the world could result in less support for development, peacebuilding and stabilization efforts in Somalia as countries prioritize their resources to fight the pandemic domestically and to cover the economic losses in the upcoming months and years.

Despite the worst possible starting point, Somalia has responded to the crisis speedier than many wealthier countries. Right after confirming the first case of COVID-19 in Somalia in March, the government suspended international flights, closed schools and universities and urged people to follow social distancing. While important measures have been taken, there is a lack in capacity to enforce the guidance on social distancing, the religious sites are still largely open to the public, people are gathering in large groups in mosques and at homes and disinformation on the virus and the ways to tackle it is widely spread. The potential closure of Mosques has caused heated debates amongst citizens and decision makers throughout Somalia and recently an attempt by the police to close Marwaz mosque in Mogadishu resulted into a demonstration by the public. This demonstrates the need for religious leaders to take a clear role in guiding the public on how to safely practice one’s religion during these exceptional times. 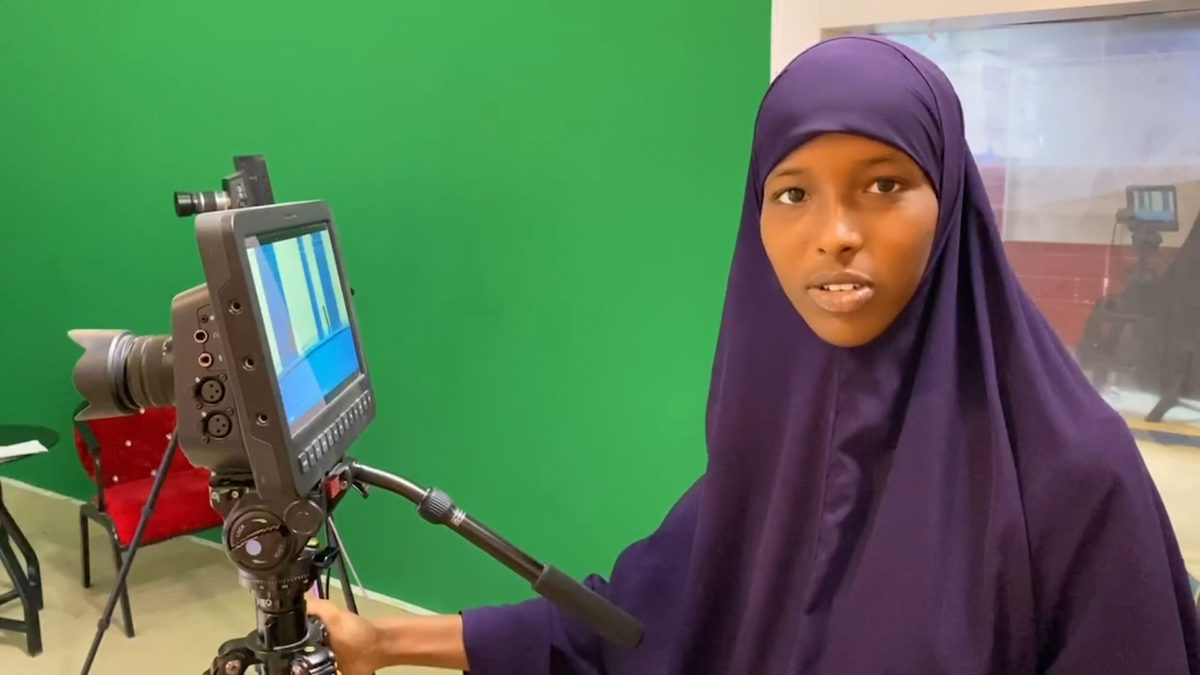 Somali National TV camerawoman Nastexo Abdi Jaliil at work. SNTV has supported the dissemination of the produced videos and studio discussion on COVID-19.

Due to the limited capacity and resources by the government, the role of civil society, media, women and youth influencers, as well as religious and traditional actors, in supporting the country to respond to the crisis is crucial. In large parts of Somalia, people do not have access to the correct information disseminated by government or health authorities and in many instances, religious and traditional leaders have more authority and influence on local communities than authorities at the national or local level. In addition, in an oral society such as Somalia, information spread through radio, TV or videos is likely to have a greater impact and outreach. Thus, prominent women and youth leaders and activists play a major role in connecting with young people through social media and utilization of innovative measures to communicate accurate and timely information about the virus and related safety measures.

Against this background, and with support of the Ministry for Foreign Affairs of Finland, the Network and FCA Somalia, together with Wali Media Production Center and local Cafis (“forgiveness”) media team have been working with prominent Somali and Somali diaspora figures and authorities to spread correct information on COVID-19, to counter the disinformation and to give guidance on how to practice social distancing and other precautionary measures while abiding by one’s religion. The aim of the initiative is to urge Somalis around the world to follow the guidance by the health authorities by utilizing the authority and example of religious leaders and other prominent figures, such as youth and women influencers. The messaging to the Somali diaspora communities, especially those unable to access right information on their mother tongue or working in sectors and where social distancing is not possible, is also a crucial part of the response to the crisis. This is especially important as the Somali diaspora has been overrepresented among the people infected by COVID-19 in countries such as Sweden, Finland and UK.

The video inserts and discussions filmed for this purpose feature Somali imams, doctors, journalists, youth activists and government authorities providing information and guidance as well as introducing locally led initiatives to fight the pandemic and further connects them to discussions with representatives of Somali diaspora in Finland. In one of the videos, Sheik Abdirisaq Suqulle, an imam from Helsinki, gives guidance for people to perform Tarawih, the traditional night prayer of holy month of Ramadan, at home, stating that human lives are the most important. With this message, Sheikh Suqulle joins the religious leaders around the world, who have called for preservation and protection of human life as the uniting and profound principle of different religious traditions.

Another video features a Somali youth activist, who has taken a self-initiative to fight the pandemic, by using a megaphone in the streets of Mogadishu to tell people about the dangers of the virus and how to protect oneself. The video insert is followed by a discussion with Somali Human Rights Activist, who stresses the vulnerability and inability of children and youth living in the streets and refugee camps, to protect themselves from the spread of the virus. Lastly, in one of the studio discussions, the Director General of Somalia Ministry of Information and a Finnish-Somalia trainer of journalists discuss how to counter the misinformation spread around COVID-19. Until now, the discussions and video inserts have been shown in the Somalia National TV and Horn Cable TV during the evening and night times, when families are gathered together for Iftar to break the fast.

These responses and initiatives by actors at all levels in Somalia and in wider Somali communities around the world, demonstrate the impact and importance of government, authorities, community leaders, civil society and media working together to contain the virus and to protect one another. The collaborative effort of these actors is utmost important in Somalia, where most of the society does not have a safety net of a functioning health care system, social support, lacks access to basic amenities and clean water and certainly does not have the privilege of working from home. Hopefully, these videos will alarm the international community to the realization of the pressing needs of support in fragile and developing countries and to further understand that we will all face the consequences of this pandemic at our doorsteps sooner or later, if we don’t respond to it now with global solidarity.

A digest of the videos with English subtitles can be viewed here.