The Final Townhall: Reflections from the AHA! Project 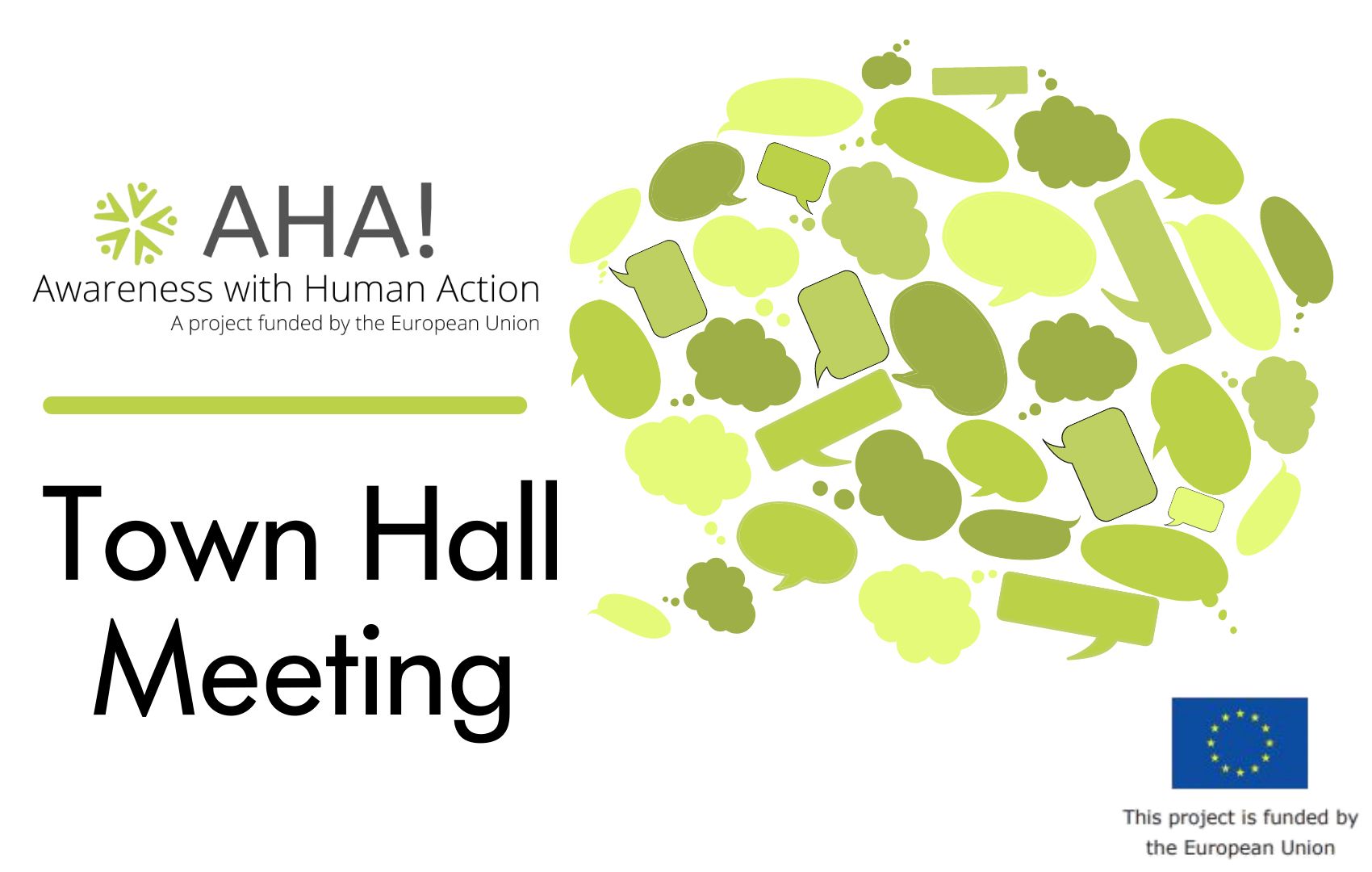 Over 45 peacebuilders from South Asia and beyond gathered at the final European Union funded AHA! project Town hall to discuss the main achievements and lessons learned from the duration of the AHA! project as well as to convene and connect project associates, partners, the wider peacebuilding community in South Asia to learn how AHA! grantee projects have supported sustainable change within their communities.

Over the past 18 months, the AHA! project contributed to the response efforts of the COVID-19 pandemic by preventing conflict and building social cohesion in Pakistan, Sri Lanka, Bangladesh, and broader South Asia. Through a collaborative approach, the project aimed at increasing outreach for initiatives that promote awareness of COVID-19 and constructive narratives that reduce discrimination, hate speech, and stigmatization against specific communities, primarily targeting religious leaders, and women and youth leaders as community influencers.

Project partner, Professor Samia Huq of the Center for Justice and Peace at BRAC University Bangladesh led participants through the final Townhall.

Dr Mohamed Elsanousi, Executive Director of the Network of Religious and Traditional Peacemakers offered introductory remarks extended his sincere appreciation to the European Union for their financial support and unwavering commitment to peacebuilding and peace mediation – and he also thanked the members of the AHA project consortium, all of whom played a critical in making this happen.  He explained how this project was developed with a special focus on countering misinformation and strengthening collaboration between religious actors, women, and youth. Further, this project has been able to achieve its goals of improved consensus and an environment of inclusion of women and groups with different religious affiliation. These goals were achieved through the specific design that included 50 small grants, a comprehensive communications strategy and capacity building efforts. Not only did the project achieve its goals, but also built synergies and unique local collaborations of peacebuilding actors, faith-based institutions, and policy makers.

A representative from the United Nations Office on Genocide Prevention and the Responsibility to Protect connected the AHA project with the work their office is doing on hate speech and gender. The office works globally, and its mandate is focused on the prevention, specifically early prevention. Addressing hate speech is one of the means of early prevention as its often a precursor and a trigger for these crimes. One of the key actors in this space are religious leaders as they have a voice of influence in the region but also globally. The office has together with the Network organized an event looking at the best practices and lessons learned to prevent hate speech and the incitement to violence. The office emphasized that women are especially vulnerable because often they are targeted doubly – based on their gender but also on other identities, such as ethnicity and religious background.

The Team Leader, Stability and Peace, Horizontal Matters, Foreign Policy Instruments – Asia/Pacific, Delegation of the EU to Thailand, explained how the project generated new partnerships, networks and interactions as well as amplified the voices of participants in tackling hate speech and misinformation.

Dr Katherine Marshall, AHA Project Partner and Senior Fellow at the Berkley Center for Religion, Peace, and World Affairs, Georgetown University offered the keynote speech with three reflection points: the experience of COVID-19 as such, the challenges the project has faced considering the pandemic and where we are now. In 2020, no one knew what was going to happen, but in reflecting, the pandemic will be seen by our grandchildren as a turning point in history – it has affected every person in the world. Inequalities faced by society became apparently evident of most every community around the world. Many people thought that the pandemic would bring people together seeing the common threat that is poses, putting aside other issues. But history has already showed us that pandemics are times of scapegoating, blaming and increased and new tensions. They carry the danger of aggravating tensions.

We must use the knowledge and insight from the project and take it forward, learning the key lessons. While many countries have reduced COVID-19 restrictions, the pandemic is still very much with us. Two key actions need to happen to allow a return to some sort of normalcy: vaccination equity and providing vaccines to everyone on the globe – reaching those who haven’t been reached yet. The second is the gross inequalities and unfairness the pandemic has unearthed. Here, the health sector needs to be equipped to better be able to respond. In addition, there needs to be mechanisms to overcome the education losses through school closures and mitigate education inequalities. There are also several other secondary effects that need to be addressed, such as hunger, that has been greatly aggravated by the pandemic. Projects, such as the AHA project is necessary to support social cohesion and mitigate the second order impacts of the pandemic. 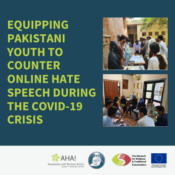 A cornerstone of the AHA! project is through 50 small grants awarded to local peacebuilders to develop and implement their own community-based peacebuilding project.  Read case reviews in which explore the unique and innovative approaches by AHA grantees to build awareness, spread factual information, counter misinformation and reduce hate speech related to the COVID-19 pandemic.

In Pakistan, the situation turned quite divisive and hostile shortly after the first COVID-19 cases appeared, leading to an increase of religious and sectarian tensions, especially on social media.  However, the AHA project came at the exactly right time to counter misinformation and sectarian divisions – with religious leaders being on the forefront of peaceful messaging. Because project was engaged strongly on a local/community level, the reach of the project was quite unique. There were 5 organizational small grants and 10 individual ones (plus one regional one operating out of Pakistan). Most of projects worked with religious groups in one way or another, with a large majority of the projects working with women and youth.

12,000 direct and indirect beneficiaries were reached through activities in Pakistan – out of which the majority were women and youth. There were significant communications efforts to specifically reach those communities using television, social media, and participating at public events. The religious education community has engaged with the project and emphasized messages of peace and harmony are more needed than ever given the crisis in the country at the moment. 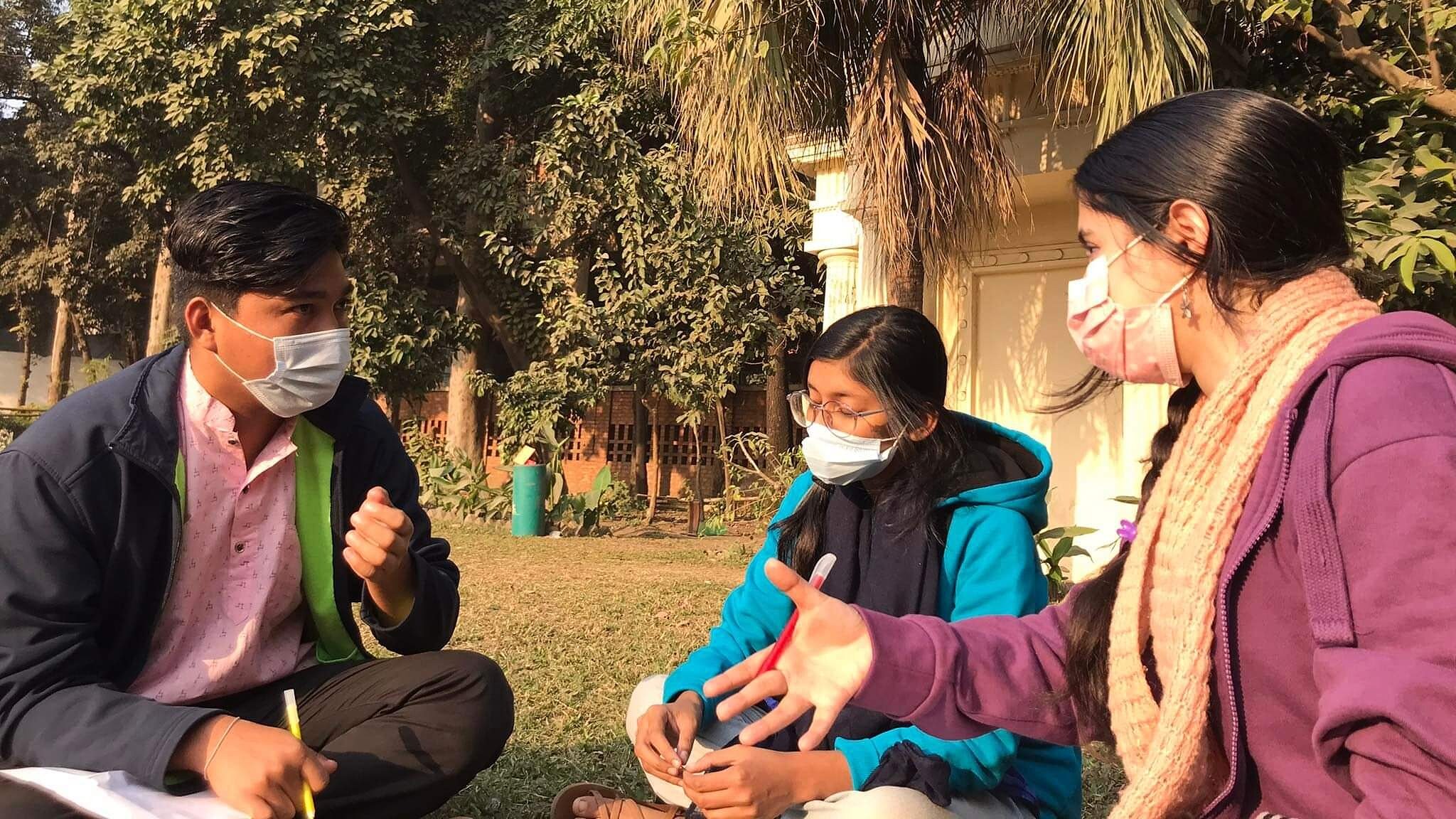 In Sri Lanka there were 10 individual and 5 organizational small grant that had a huge impact on the peacebuilding landscape across the country. The project and grantees had over 3,000 direct beneficiaries and nearly 15,000 indirect beneficiaries, including over 668 religious leaders engaged through trainings and knowledge exchanges.  Sri Lanka heavily utilized social media to disseminate messages to response to the COVID-19 pandemic and its second order impact. The partners engaged in 12 community based social media campaigns and developed 52 communication materials. These efforts reached over 12 million people in the country. 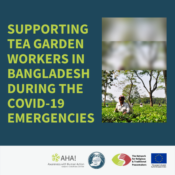 15 recipients received a national level small grants within Bangladesh. There efforts reached more than 1,500 direct beneficiaries that have enhanced capacities and overall, more than 80 events such as trainings, interfaith workshops, townhall discussions and community level dialogues. Over 10,000 people were reached through offline activities and made aware of COVID-19, hate speech, misinformation and gender stereotypes. Many millions of people have been reached through the online and offline media campaigns and an access of 20,000 people benefitted from direct support including the provision of masks, sanitizers, but of course also counselling and community activities.

To conclude the event, the United Nations Office for Counter Terrorism offered contextualizing remarks on PCVE policies in South Asia and its relation to interfaith work. The UN’s work in the region is based on the global programme on preventing and countering violent extremism. When the pandemic unfolded, violent extremist organizations immediately adapted their strategic communications – and the UN aimed at countering that with a special focus on the target groups of young religious leaders and media producers but also women and youth in general. Misinformation was one of the main problems and weaponized by these groups to sow hatred and widen existing divisions. Therefore, targeted efforts were made to counter this misinformation, increase digital literacy, and train people in strategic communications.

About the AHA! Townhall series

As part of the European Union funded Project AHA! Awareness with Human Action, the AHA! Townhall series includes regional and country specific learning exchanges to discuss the COVID-19 response in the light of hate speech, intergroup tensions including scapegoating, inclusion and conflict prevention. These virtual townhall learning exchanges will invite and engage participants across South Asia and representatives from the international community, peacebuilding practitioners and peacemakers across the targeted countries. Over the course of a year, there will be nine AHA! Townhalls organised regionally and nine in each of the targeted countries: Sri Lanka, Pakistan and Bangladesh. The series will start with smaller sessions informing about the project and its objectives and evolve into needs-based learning exchanges and capacity building sessions on thematic subjects.